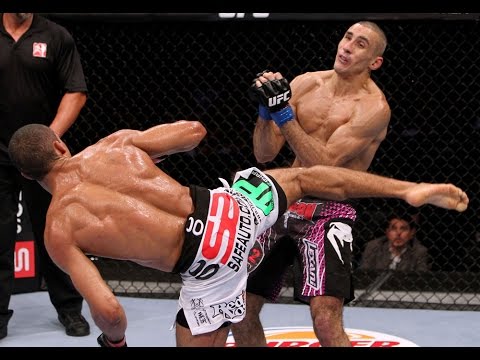 When it comes to all-action fights, few permutations could be put together that would beat out UFC on ESPN 2’s main event, which may as well be dubbed the Battle of the Leg Kicks.

That’s because lightweight headliners Edson Barboza and Justin Gaethje have not only long established themselves as two of the most violent men in the UFC’s most talent-rich division, but also two of the most fearsome leg-kick practitioners in the entire sport. The two have surgically slashed away the limbs of countless hapless foes in the past, and even before their March 30 fight was ever made official, Gaethje was already promising to do the same to the Brazilian once Barboza’s time came. And now that UFC on ESPN 2 is nearly upon us, Barboza is more than happy to welcome Gaethje to try and live up to his words.

“A lot of guys don’t talk about that,” Barboza told MMA Fighting with a grin, “because I come from Muay Thai. Everybody tried to finish me with a leg kick, but nobody finished me yet with a leg kick. You can say whatever you want.

Barboza may only have two official finishes via leg kicks on his UFC résumé — the last of which came all the way back in 2013 against Rafaello Oliveira — but don’t let the numbers fool you. If his most recent win against Dan Hooker is any indication, the Brazilian’s low-kicking game has never been more ferocious than it is today.

Gaethje’s style, on the other hand, is rather dissimilar despite often leading to similar results. While Barboza likes to use his kicks in explosive, whip-like bursts which can instantly cripple an opponent’s limbs, Gaethje tends to take a more methodical approach, unloading a constant stream of heavy low kicks that amount to a wilting and torturous death-by-pressure for foes when combined with his suffocating standup tactics. It’s a style that can be a nightmare matchup for any lightweight on the planet, and one that has fast made Gaethje into one of the UFC’s foremost fan-favorites.

“He’s a fun guy to watch,” Barboza said. “People like him. And me too, I’m a big fan of [his] fights. I love to watch his fights. It’s going to be a fun night for us. … He has a lot of heart. He’s a true fighter. He walks forward, he goes to bang. That makes me very excited because this fight’s going to be a big war.”

That forever-walk-forward approach has turned Gaethje’s fights into somewhat of coin-flip affairs in the UFC. Though he is only 2-2 in his four Octagon appearances, he could very well be 4-0 if only one or two extra breaks had fallen his way. That same approach has also had the side effect of making him become the posterchild of ‘Fight of the Year’ lists across the world. On this website alone, he has owned the category in back-to-back years for his legendary wars of attrition against Michael Johnson and Dustin Poirier.

But Barboza is no stranger to ‘Fight of the Year’ lists himself, and he welcomes Gaethje to come and try to make it three straight years at UFC on ESPN 2.

“I don’t worry about the damage,” added Barboza. “If I thought about the damage, I’d go to be a doctor or, I don’t know, do something different. I’m a fighter. This is my whole life. I’ve [been taking] damage my whole life. I’m a Muay Thai fighter. I think I’ve had close to 1,000 stitches in my face. I’m definitely not worried about the damage. A couple years ago I remember I had my fights against Tony Ferguson and Paul Felder, [they were in conversations for] fights of the year. I have them too. That makes me very excited.

A win for Barboza would provide a pivotal boost up the ranks in a UFC lightweight division that is slowly figuring itself out, beginning with UFC 236’s interim title fight between Barboza’s teammate at American Top Team, Dustin Poirier, and featherweight champion Max Holloway. Because of his sensational fourth-round stoppage of Gaethje last year, Poirier has been a helpful resource for Barboza to lean on in the lead-up to UFC on ESPN 2.

But if he needed any extra motivation, Barboza has certainly found it at home. His wife Bruna is 38 weeks pregnant, he said, and the arrival of the couple’s new baby daughter Victoria is imminent. Barboza said doctors have predicted April 5th as the big day, but both he and Bruna have made furious preparations in case Victoria tries to surprise them by showing up a bit early. Bruna’s family have already traveled to Florida to support her if something happens while Barboza is away for fight week in Philadelphia.

Barboza admits the whole process has been motivating, if not stressful and even a little scary to figure out as he prepares for fight against a genuine wildman. But he is also excited for what is to come, and is making sure to keep his focus affixed squarely on the future.

And that future starts with a dance date against Gaethje that should have the mouths of fight fans watering at the thought.