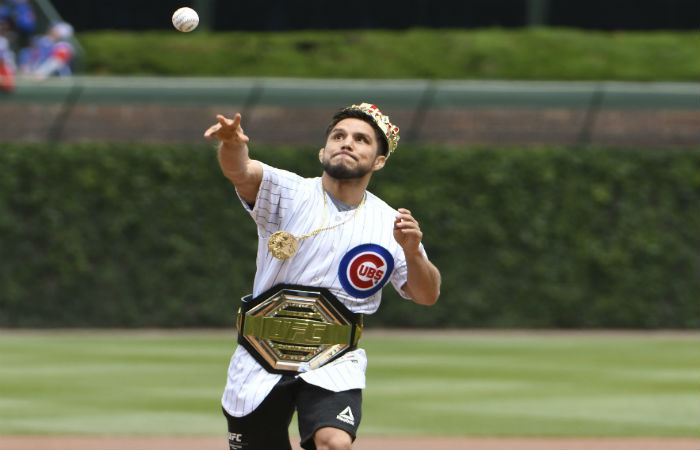 Eric Albarracin wasn’t surprised that his pupil Henry Cejudo finished Dominick Cruz inside two rounds, but was shocked he retired.

Cejudo was looking for his first bantamweight title defense when he landed a perfect knee that dropped Cruz. “Triple C” followed it up with ground and pound shots to win the fight by TKO. For Captain Eric, he says Cejudo followed the gameplan perfectly.

“I mean we had the perfect gameplan set up by Eddie Cha. We trained for Jose Aldo and Henry was ready to take him out and end his legacy,” Albarracin said to BJPENN.com. “When that fight fell out we did another four-week camp for Dominick Cruz. The gameplans were different and this one was to chop his legs off and deliver them to Carole Baskin here in Florida and feed them to the tigers.”

Although many questioned the stoppage, Albarracin said the ref did a good job. He also knew Cejudo would win the fight in that round, especially after a cut opened up on his forehead.

“When Henry decides to finish somebody, it is over. Henry decided it is over when he cut his head,” he explained. “He thought I’m bleeding and I can’t let a doctor take this away from me so he knew was finishing it there.”

After the fight, Cejudo shocked many fans and even his coach by announcing his retirement. Captain Eric says just before they went to the arena they agreed they were going to call out Alexander Volkanovski and Conor McGregor. But, Triple C had his own plans.

“We were really surprised. On the day of the fight, we were talking about who he was going to call out after the fight. We talked about Conor McGregor, Alexander Volkanovski, and Aldo, and we thought let’s call them all out,” he said. “The plan was to change Henry’s nickname to C4 and Henry said stop right there I’m done. If he’s happy, I’m happy.”

Since Cejudo announced his retirement, many have wondered if it is legit as Ali Abdelaziz says Triple C will return.

According to Albarracin, he says the retirement is as permanent as it gets after talking to Cejudo recently and knowing he wanted to retire on top.

“I would never say never but it is permanent. When Henry won the Olympics in 2008 everyone thought he would go two or three more and he said I’m done the next day. We’ve seen this before,” he said. “He came back in 2012 but his heart wasn’t in it. He knows you can’t take two or three years off from this game and come back at the top. Cruz did it, but it’s really hard so I think he is done.”

If this is it for Cejudo, Albarracin knows he will go down as the greatest combat sports athlete of all-time.

“Triple C is the GOAT. His first round at the Olympics was against a former world champion. No one has done what he has done. There will never be another Triple C and he is the greatest of all-time due to the quality of opponents he has beaten. He has the highest quality of opponent the next was Jon Jones,” he said. “He beat Demetrious Johnson, he beat TJ Dillashaw the greatest bantamweight if you don’t think he was the 135-pound GOAT the other person was Dominick Cruz and Henry took him out. Then you throw in Marlon Moraes. There are no comparisons. Henry is the greatest combat athlete of all-time.”