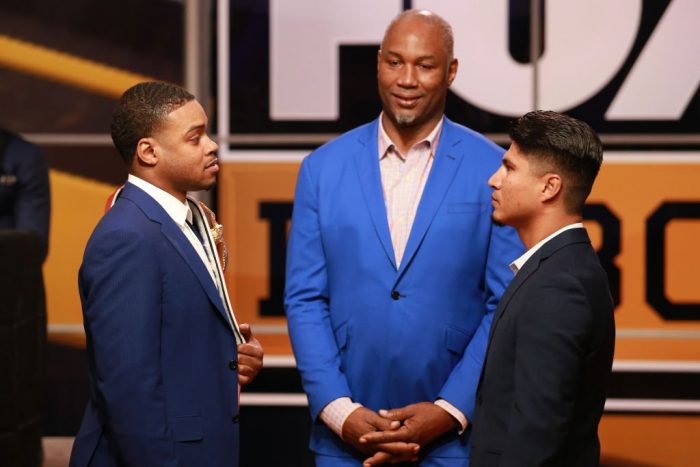 Mikey Garcia wanted to be great, so the four-division titleholder took the biggest risk of his career, moving up to welterweight to face unbeaten IBF titleholder Errol Spence Jr at AT&T Stadium in Arlington, Texas.

What did we learn? That Errol Spence Jr is a really good welterweight, and Mikey Garcia isn’t.

Garcia, 31, was really never in the fight at all past the second round, which was probably his best, or at least the one he had the best argument for winning. And it didn’t just come down to size and reach and power advantages for Spence, which were well-advertised ahead of time. Spence was simply better than Garcia in every single aspect of the fight, some of which, of course, did include the well-known physical advantages everyone expected.

But Spence really out-boxed Garcia in this fight, was far more active, and out-landed him substantially. He only seemed to have Garcia in any real trouble at one point, in the ninth round, after which Garcia’s trainer and brother Robert threatened to stop the fight, before Mikey convinced him to let it continue. For the most part, Spence, 29, just dissected Garcia.

“I can box, I can move my head, I can do all that if I want to,” Spence said after the fight. “The game is to be smart, it’s the sweet science. I had the size advantage and I had the reach, so why not use my jab and take something away from him?”

Garcia admitted the clear defeat when it was his turn on the mic.

“All the credit to Errol Spence, he’s a great champion,” Garcia said. “He is ‘The Truth,’ he’s for real. He put up a great fight and executed the game plan very well. He kept the distance at his favor, I wasn’t able to really get my rhythm going. He did what he had to do.”

Now we wonder what’s next for both. Mikey said he “probably will go back down to the lighter divisions,” which is smart. He got a taste of the highest level of the 147-pound ranks, and was clearly out of his depth. There’s just no upside for him at that weight — he might be able to beat some second- and third-tier welterweights, but what does that lead to? Another title shot against someone like Spence, Keith Thurman, or Shawn Porter, and that’s just not a good idea.

At 135 or 140, Garcia can go back to legitimately competing as one of the best pound-for-pound fighters in the sport, something it will be easy for many to forget he’s proven to be in the wake of this fight. He’s probably not going to fight Vasiliy Lomachenko at 135, as much as we’d all like to see it. Garcia is a PBC fighter, and Lomachenko is with Top Rank and ESPN. The odds of it happening are really low. But there are other fights at those weights, and he can get back on track if this fight didn’t take too much out of him.

Spence, on the other hand, is a clear top guy at 147, and he did his best to set up another major fight in the ring, immediately following the win over Garcia.

Manny Pacquiao, the legendary 40-year-old fighter who does hold the WBA’s secondary “world” welterweight title, was already in the ring when Spence called him over and said, “It would be my honor to fight him next.”

Asked if he wanted to face Spence, Pacquiao replied, “Yeah, why not? We’ll give the fans a good fight. I’m so happy to be here in Dallas and I’m hoping I will be back here soon.”

That fight could happen this summer at AT&T Stadium, where Pacquiao fought twice in 2010 when the stadium was new, beating Joshua Clottey and Antonio Margarito. The 2010 version of Manny Pacquiao no longer exists, but he’s still a legit fighter at 147 and a major name. And Spence, obviously, would have the chance to beat a true legend. Both are PBC fighters, so it checks all the boxes.