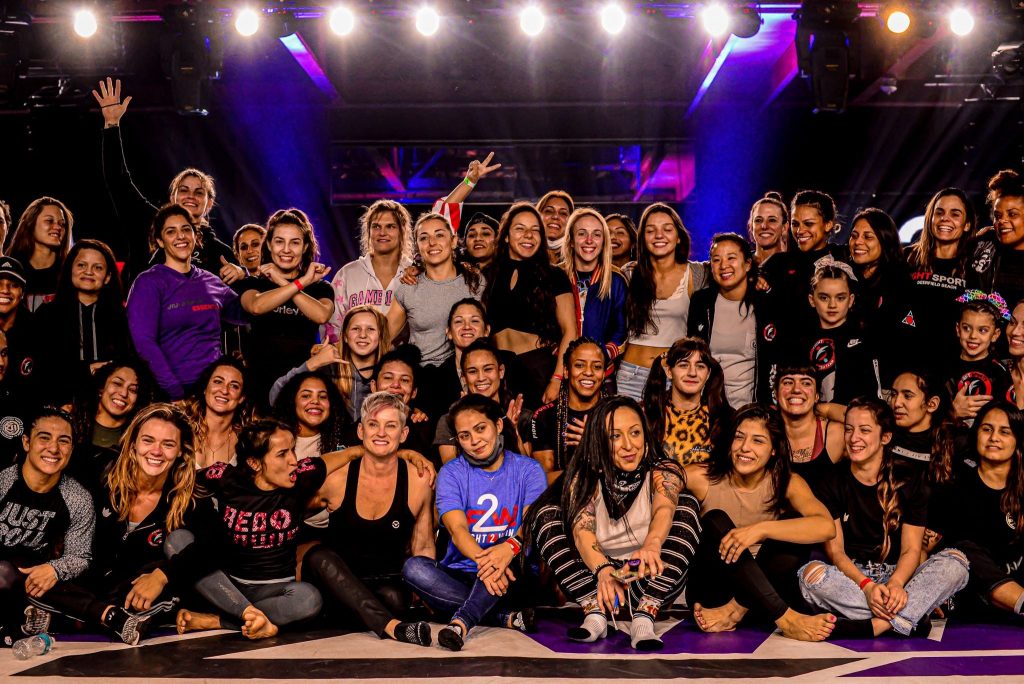 Fight 2 Win’s first ever female-only card proved to be a stupendous thrill ride from start to finish. With several titles on the line and a stacked card, The co-main and main events had stiff competition for fight of the night. But both “Amanda Alequin vs Nathalie Ribeiro” and Lightweight title bout “Ana Vieira vs Rafaela Guedes”  lived up to the hype as all four women lit the mats aflame with diamond like pressure.

Alequin and Ribeiro started out strong on the feet, each calmly probing for openings for a takedown. Ribeiro attacks first with a foot sweep attempt that nearly caused a ring-out. After a reset, Ribeiro found success with her second takedown attempt towards the mat’s edge. After the quick retrieval of a lost hairband from Ribeiro, the Lucas Leite black belt began working the pass from half guard. Seeing an opening, Ribeiro stops the pass to go in deep on a kneebar but Alequin frees her leg.

Back on her closed guard, Alequin fires off a few short triangle attempts against Ribeiro. Defending, Ribeiro returns to her pass looking to stack an inverting Alequin. Disengaging for a double-under attempt, Ribeiro failed to advance past the guard as the bell rings.

After a short deliberation later, and Alequin received the decision win.

Onto the main event!

Lightweight champ Ana Carolina Vieira and Welterweight champ Rafaela Guedes wasted no time turning on the gas in their match.

Vieira started changing levels  and Guedes reached out for a snap down in response. Vieira shot in for a lightning quick double leg but Guedes immediately sprawled before pushing her into closed guard. Slamming Vieira a few times, Guedes began to work the pass as Vieira went to attack her left arm. Vieira slams again to get free, and both return to the feet.

Guedes puts on the pressure once again, quickly finding the mat’s edge fighting for head control.  Re-centered once again, Vieira pushes forward in response. But Guedes pulled a big ol’ UNO Reverse Card with a blast double that sent both athletes clear off the edge of the mat onto a concerned crowd!

Both indestructible women emerged from the floor unharmed , and quickly made their way back to the mat to start again. Vieira returns fire with a takedown, but is soon swept after Guedes attacks a kneebar. Both women stand for another round of takedowns kicked off by Vieira. A rolling toehold from Guedes sends both to the edge again causing a reset. Guedes reverses a single leg from Vieira to end on top before, you guessed it, another reset to the center.

Vieira tries to get going from bottom but Guedes again slams to get free from closed guard. The match nears it’s end and both Vieira and Guedes go deep in on leg attacks. Vieira starts with a heelhook and Guedes counters with a toehold. Feeling the heel slip, Vieira switches to a toehold as well. Despite the harsh angle of the foot, Guedes gives the crowd a relaxed shake of her head to indicate the lack of danger as the buzzer sounds.

The judges convene, and proceed to award Guedes the decision victory.

An incredible card and wonderful first female card for the ever-impressive F2W legacy. For those unlucky enough to have missed it, going back to watch any of the matches on the card would be time well spent.

See you all at the next one!