Fedor Emelianenko hints at return for another fight 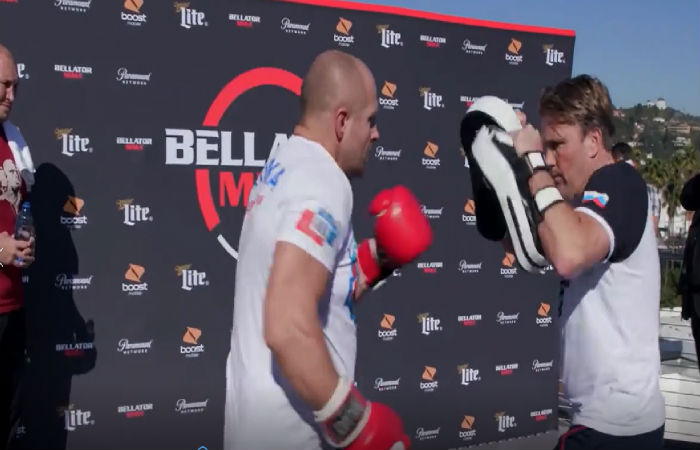 Fedor Emelianenko doesn’t sound ready to ride off into the sunset just yet.

It was a jaw-dropping victory for Emelianenko, who was competing in his home country for the first time in over five years, while adding yet another highlight reel victory to his already stellar record. Despite the long list of accolades he’s racked up during his career, the 45-year-old Russian couldn’t help but feeling this win was a truly special addition to his resume.

Of course considering Emelianenko just demolished one of Bellator’s top heavyweights, it’s tough to imagine that he’ll be able to walk away right now with one fight still remaining on his current contract.

Ahead of fight week, Emelianenko held his cards close to the vest when asked about retirement, although he had previously said that he expected to compete one more time after Saturday’s event.

Now with this latest win, the former PRIDE champion is still not ready to commit to anything, although it certainly sounded like he would return to fight again.

“I will answer this question tomorrow,” Emelianenko said with a smile when addressing his future. “I would like to say that at the moment I’m not planning on finishing the career.

While competing at home was special, Emelianenko admits that if he does return for another fight, he might favor his last bout take place in the United States or maybe even his old stomping ground in Japan rather than Russia.

“It’s much easier for me to perform in America,” Emelianenko explained. “I don’t have such huge, huge attention or maybe I do get the attention, but all the events, they are strictly planned.

“Here at home, all our camp and our preparation for the fight, they took place under the supervision of the media and journalists and so on.”

More than anything for now, Emelianenko just wants to enjoy the victory with friend and family in Russia before making any decisions about where his career goes from here.

“I feel really great,” Emelianenko said. “I feel good. I’m really very happy. I’m very happy that everything worked out the same way we were thinking about that. I’m very happy for the fact that we made the audience happy and we delivered really such great joy to our fans, to those who follow our careers and Bellator events.”