Filip Hrgovic: I feel ready to fight anyone in the world right now 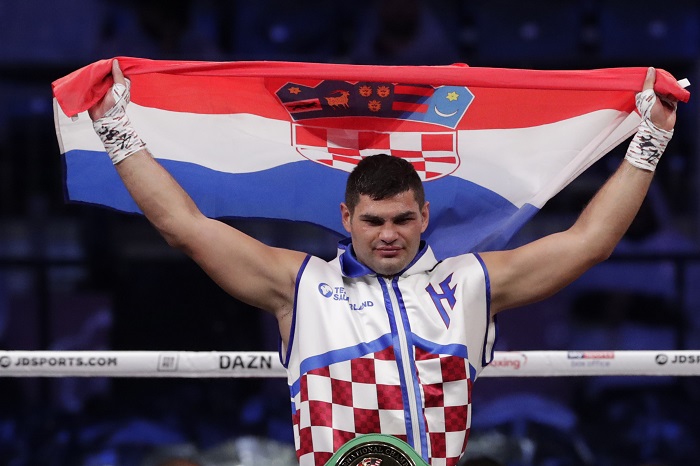 Heavyweight contender Filip Hrgovic has been idle since December due to the coronavirus pandemic.

He is anxious to get back into the ring. Hrgovic has strong belief that he can compete with even the best in the division right now.

“I feel ready to fight anyone in the world right now but, of course, I will need a few more fights to get into position to fight for the world title and the biggest names like Tyson Fury, Anthony Joshua or Deontay Wilder,” Hrgovic told BoxingScene. “But if you ask me I am ready right now. I spar with great champions, I had a great amateur career and I feel ready right now.”

Hrgovic will return to the ring on September 26th against Ondrej Pala (33-5, 23 KOs) at the Struer Energi Park in Denmark.

“Whoever it will be it doesn’t matter. I will be ready for everyone,” Hrgovic said. “During all this quarantine time I was training very hard and I didn’t have time off. So, I am in very good shape. I did a lot of physical stuff with no fight and now I start my official training.”

Although he has only 10 professional fights, Hrgovic believes he can compete with anyone in the division because of his vast background as one of the top amateurs of his time.

“I like that I am moving fast but I can’t wait to get into a real fight,” Hrgovic said. “You still haven’t seen what Filip Hrgovic can do, and I am looking forward to the biggest names and biggest tests because I am the best when I have a dangerous opponent.

“I had 30 fights in the World Series of Boxing. I had more than 100 amateur fights. So, I feel mature and I am feeling good. I think I can compete with anyone, with all the big names and the best in the division. I feel ready to box with them right now with only 10 (professional) fights. I had lot of tough fights in the WSB. I was just a kid. I was 18 years old when I started there. It was a very good test for me at that stage of my career. It was very good preparation for professionals.”

“In Croatia, I’m popular but my goal, of course, is to become international,” Hrgovic said, adding that he is excited to have his second fight in the U.S. in October.

“America has the biggest boxing tradition and for me it’s special to box there,” said Hrgovic, whose U.S. debut was a first-round knockout of Corbin in May 2019 on the Haney-Antonio Moran undercard in Oxon Hill, Maryland. “I hope I will box more often there and I will introduce myself to the American audience.”

In the meantime, Hrgovic said he will continue to work toward his goal of facing top contenders and eventually fighting for a world title. He said he knew he was on his way when he was given a spot on the Joshua-Ruiz II card.

“It was great thing for me. It was a great job from my promoters and manager,” Hrgovic said. “It was an honor for me to fight there because there are so many prospects in the world and stars and they gave me the opportunity. I come from a small country of 4 million people. So to fight on the event like that it is was a real miracle when you see where I come from.

“We don’t have a big boxing tradition in my small country. If I was from Great Britain or the United States or Mexico I would already be superstar. But it is what it is. I did it the hard way. I know who I beat. I know how I spar with the best in the world. I know what I can do.”

Interview was made by World Boxing News.