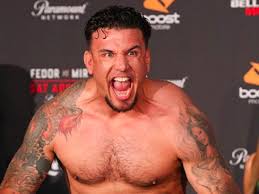 The 40-year-old veteran, who has competed in Bellator MMA since 2018, revealed that the terms of his contract with the Viacom-owned promotion came to an end on April 1. Due to the ongoing coronavirus pandemic, Bellator has obviously been unable to get Mir a fight.

That said, Mir spoke to Bellator president Scott Coker about the unique situation and how he’d like to give the promotion one more fight while still looking into other options.

“Basically I had a good conversation with Scott Coker,” Mir said on his Phone Booth Fighting podcast. “I’m still going to have a fight with them, just because there’s still a fight left on my fight contract. But because of my April contract coming up and Scott was very easy to talk to about it — their company’s shut down, he hasn’t even left his house in three weeks. So, once we start up, there’s going to be a backlog of fights because they have so many fighters on their roster.

“So now I’m basically — not basically — I am a free agent. Even though I would still do fights for Bellator, I’m not beholden to any contract to anybody now. So I can try out the free market and see whoever opens up fighting first.”

Mir has gone just 1-4 in his past five fights with three of those four losses coming by way of knockout or TKO. Most recently, Mir picked up a unanimous decision win over fellow UFC veteran Roy Nelson in October 2019.

Since that time, Mir hadn’t booked another fight and Bellator has already postponed all of their upcoming shows through May due to the COVID-19 outbreak.

Now Mir is looking forward to fighting again while also looking at the possibility of returning to his old stomping grounds at the UFC as a color commentator.

“It has always been a dream of mine to fight in Japan,” Mir said. “I remember watching the old PRIDE’s back in the day and RIZIN, it looks like they have a card coming up in August. So now I’m actually opened up to where I can start talking to other companies and seeing where to go, which is great for commentary stuff.

“Because before being exclusive fight wise to Bellator curbed me as far as commentating for the UFC. Now maybe it will open up that avenue where I can start doing commentary for UFC fights again and other organizations.”

While he still plans to fight again, Mir obviously seems interested in exploring his options to return to more broadcast work as well. Now that he’s a free agent, Mir is clear to sign and work with anybody he chooses.