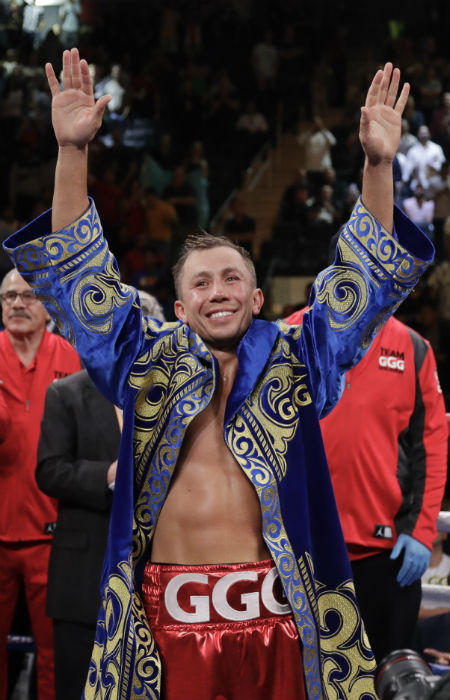 Gennadiy Golovkin, by the promotion of it all, broke a record tonight with his 21st middleweight title defense, thoroughly dominating Kamil Szeremeta for a stoppage after seven rounds of one-way action.

Whether or not you want to count the record (there are reasons to not), Golovkin (41-1-1, 36 KO) dominated in this fight as he has against so many in his career. The 38-year-old star from Kazakhstan will get a lot of “GGG of old!” hype from some corners for this win, but it was a mismatch on paper (Golovkin was a -2500 favorite) and played out as one in the ring.

Szeremeta (21-1, 5 KO) is a former European titleholder and was the IBF mandatory challenger, but he was never seen as a real threat to GGG, and that’s how it played out in the ring. Golovkin dropped Szeremeta in the first, second, fourth, and seventh rounds, and there was simply nothing the game but vastly over-matched Polish challenger could do.

Golovkin worked his famously heavy jab nicely, went to the body when he wanted to, mixed up his shots upstairs nicely, and when he landed with the thuds, Szeremeta had trouble handling the power. With Szeremeta’s own power limited, Golovkin feared little in return, and there was nothing Szeremeta could do to discourage the onslaughts when Golovkin felt like letting it go.

“I felt very comfortable. I work hard, I had a lot of time, I had a lot of good people with me. I’m very proud of my team,” Golovkin said. “I respect Kamil’s trainer and corner, they’re very smart, because, you know, he was done. Come on, guys. I felt my jab, my power, my timing.”

Golovkin sort of said he let the fight go on further than he needed to, and then didn’t call out tomorrow’s Canelo-Smith winner, but said he would like to fight the victor.

“I’m open for anybody, the best opponents for me, for business, for DAZN, I’m ready,” Golovkin said. “I hope tomorrow is a great event, and may the best man win. The fans will win that one.”