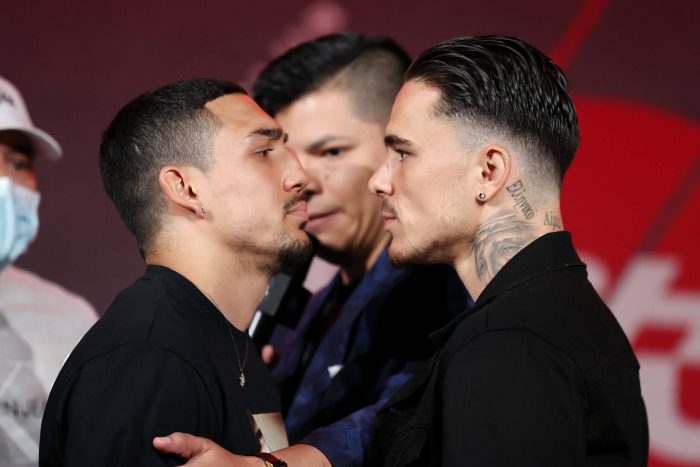 Kambosos (20-0, 10 KO) now owns the WBA, IBF, and WBO lightweight titles, as well as the Ring Magazine championship, and has already promised to be on hand next Saturday in Las Vegas, where WBC titleholder Devin Haney defends against Joseph Diaz Jr, also on DAZN.

Lopez (16-1, 12 KO) came out like a maniac in the opening round, hurling monster shots at Kambosos, who stayed calm and patient, and wound up dropping Teofimo late in that first round. Kambosos ate some good right hands from Lopez in that and the next few rounds, and simply didn’t go away — just as he promised he would not.

Though Kambosos was fighting extremely well, there remained the sense that Lopez was the heavier hitter, and that his power could bail him out of the fight. We nearly saw that in the 10th round, when he dropped Kambosos and tried to pour on some pressure. But Kambosos fought smart, survived, and got his legs back. The Aussie won the 11th and 12th rounds, at least on our card and, to me, it was pretty clear on both, and Lopez just couldn’t find the answers.

George Kambosos Jr won this fight because he was the better fighter in the ring tonight. There is no two ways about it, it’s simple and plain. He did damage, he out-boxed Lopez, and he out-fought him, too. Both wound up bloody and bruised, but Kambosos was the better man, and he deserves his belts and all the respect he can get.

“Did I change all week? Have I changed my whole career? Never. I believed in myself. You’s might not believe it, but I believe in myself,” Kambosos said after the stunning upset win. “I’ve got all the jewels. I’m not the king, I’m the emperor, because I come to every other country and take them out, one by one.”

“I said, ‘I’m gonna hit this guy clean, I’m gonna hit him hard, and I’m gonna put this guy down,’ and the fight changed after that,” he said of the first round, taking inspiration from Muhammad Ali against Joe Frazier.

He did throw some respect to his vanquished foe. “All respect to Teofimo, he’s a great kid,” he said. “The build-up was the build-up, we’re both competitive, young guys, but it was my night, and it’s going to be my night for a very long time.”

Kambosos said he got dropped because he’d attempted to entertain a bit too much, but gave himself credit for coming back strong, and everyone should give him that credit.

“I wasn’t hurt,” he said. “I won the next two rounds, no problem. But all respect to him. He’s a great champion and he beat the great Vasiliy Lomachenko. But I’m a better fighter, and I was better every step of the way.”

“I won tonight, everybody knows that,” Lopez said to boos. “I ain’t no sore loser, I take my wins like I take my losses.”

“You’re a bit delusional, brother,” Kambosos replied. “Listen, I got the belts, I won the fight. I won it clean and clear. But I give you respect. Take it like a champ and move on. We can do it again in Australia in front of 80,000 people.”

Lopez said he would “go back to the drawing board” when asked if he would go to Australia for a rematch.

“I’ve been feeling it for two years now, they’ve been draining me the whole time. I should have just dropped the belts like everybody else did,” Lopez said of possibly moving up from lightweight. “This ain’t the end of Teofimo Lopez.”

“There’s mutual respect with me and Devin Haney, I wish him all the best next week, and I’ll probably be there,” Kambosos said when asked what’s next.