GLORY announced the full lineup of fights for GLORY 80, live from the Trixxo Arena in Hasselt, Belgium on Saturday, March 19.

Tickets to the event will officially go on sale on Friday, February 4th.

In the main event, Jamal Ben Saddik (36-10, 29 KO), who was on the brink of dethroning the “King of Kickboxing” Rico Verhoeven last October, will face the man widely regarded as the “Prince of Kickboxing”, Levi Rigters (13-1, 6 KO). Ben Saddik will look to prove he’s worthy of being the division’s top contender once again, while Rigters will aim to make a statement against the highest profile opponent of his young career.

Co-headlining the event, Heavyweight kickboxing legend Badr Hari (106-16, 92 KO) will get the chance to avenge his loss against surging prospect Arkadiusz Wrzosek (14-5, 9 KO). The first bout between the two fighters occurred last September at GLORY 78. Hari dominated the action early, scoring three knockdowns in the first two rounds, before Wrzosek landed a stunning high kick that knocked Hari out midway through the second round. The finish earned Wrzosek the 2021 Knockout of the Year and is widely considered one of the greatest comebacks in combat sports history. 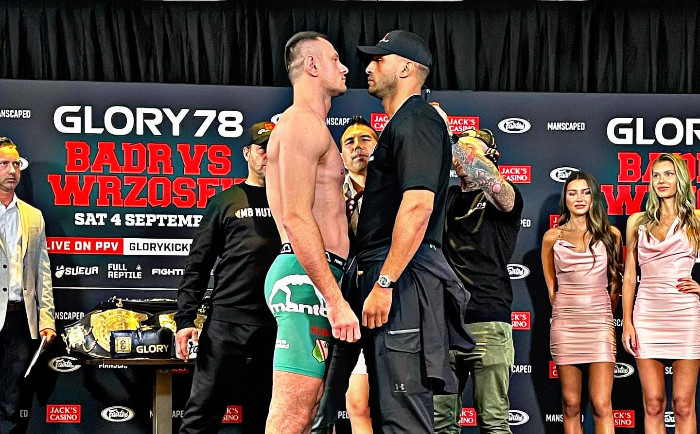 Two titles will also be on the line at GLORY 80. In the light heavyweight division, a rematch between champion Artem Vakhitov (22-6, 8 KO) and #1 contender Luis Tavares (64-8, 22 KO) will occur. Their paths first crossed nine years ago at GLORY 9, where Vakhitov defeated Tavares by knockout in the first round. Since then, Vakhitov has solidified himself as the best light heavyweight in GLORY history, defending the title a record five times while becoming the division’s only two-time champion. Meanwhile, Tavares earned his status as the division’s top contender, securing four straight victories, each over top-five opponents.

In the super bantamweight division, GLORY champion Tiffany van Soest (22-4-1, 6 KO) will return to the GLORY ring to defend her belt against RISE champion Manazo Kobayashi (16-3-4, 4 KO). After reclaiming the title in November of 2019, Van Soest defended the belt in decisive fashion over Aline Pereira in January of 2021. She will aim to do the same against Kobayashi, who looks to become the first fighter to secure titles in RISE and GLORY.

Completing the card, top ranked middleweight contender Ertugrul Bayrak (18-6, 5 KO) meets the fourth ranked Serkan Ozcaglayan (42-6, 34 KO), as both look to get a step closer to a middleweight title shot, and lightweight stalwart Guerric Billet (32-4-1, 14 KO) welcomes Enfusion veteran Nordin Ben Moh (88-8, 45 KO) back to the GLORY ring for the first time since 2012.