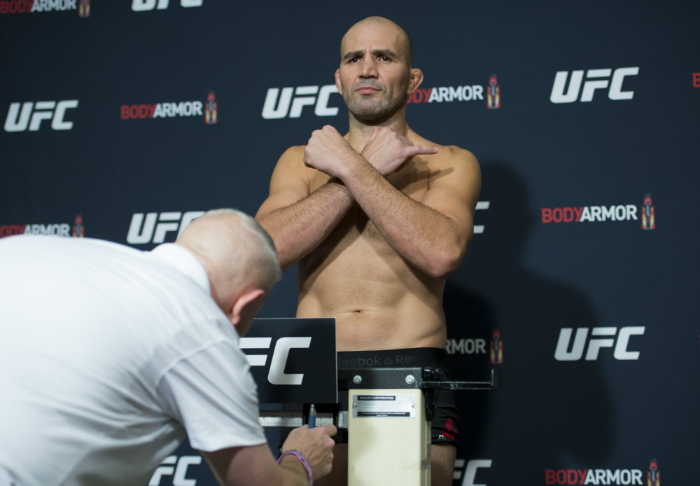 Glover Teixeira was sitting cageside at the UFC APEX on Saturday night to watch the light heavyweight championship clash between Jan Blachowicz and Israel Adesanya at UFC 259. His future was at stake, given that a win for “The Last Stylebender” could ruin his plans to be the next challenger for gold.

Blachowicz, an underdog that night in Las Vegas, pulled off the upset by winning via unanimous decision, and Teixeira, who was on standby in case of an issue with either competitor that week, was “thrilled” with the outcome of the championship headliner.

“Blachowicz winning was great for me,” Teixeira said in an interview with MMA Fighting. “Because if Adesanya wins, we’d be wondering what’s going to happen, if he would defend the 185 title first. Blachowicz came to me and said, ‘You’re next,’ so that was perfect. I made weight, I’m in shape, I was ready to fight, so it’s not like I still have to get in shape to fight him.”

UFC President Dana White reaffirmed during the post-fight press conference that Teixeira is next in line for the 205-pound gold after Teixeira’s recent wins over Thiago Santos, Anthony Smith, Nikita Krylov, Ion Cutelaba and Karl Roberson.
An excited Teixeira left Las Vegas with his family and his training partner Alex Pereira the day after the event, going on a 2700-mile road trip to New York — with a quick stop at the Grand Canyon. He expects Blachowicz to target September for an octagon return, and will be ready for it.

“This is the year. I worked really hard in 2019 and 2020, opening a new gym in 2019, coming off a loss, investing a lot of money without knowing what future would hold for me, the future of my career, where I was heading to, if everything would be alright. And I won three fights in 2019, the pandemic came in 2020 and my gym was closed, but I managed to do two wonderful fights, and now I’ll fight Blachowicz.

“I made sure to wait. No problem. This is my last chance. Everybody knows that, I know that. I’m 41 and I’ll do everything I can to win this belt. Let’s make history.”

Teixeira wasn’t super impressed by either Blachowicz or Adesanya this past Saturday. The Brazilian admits he was surprised it took so long for the light heavyweight champion to try takedowns in the fight. Teixeira said he even screamed “take him down, man” during the bout.

“It was a bit underwhelming to watch,” he said. “I don’t know, it felt like both were respecting each other too much in the beginning. And then it seemed that Blachowicz got tired but started getting the takedowns. I thought Adesanya would have a better takedown defense. He was taken down too easily.”

“I think Blachowicz’s style is easier [than Adesanya’s] for me,” he continued. “It’s dangerous, but both are. Anyone is. With good accuracy, the right timing, you go down. But Blachowicz waits more, trades strikes without moving too much, and he will accept a grappling fight more as well. I think it’s a better matchup. I prefer to fight someone like that more than someone that moves too much.”