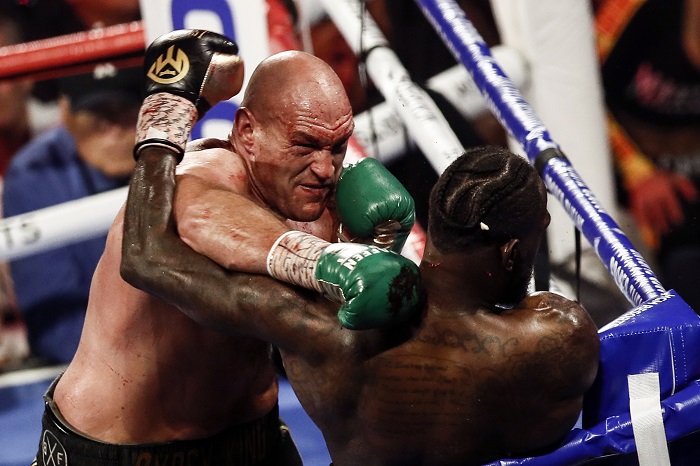 Matchroom Boxing’s Eddie Hearn believes the leal issues Tyson Fury is having with his former foe Deontay Wilder shouldn’t be a hurdle for the upcoming undisputed fight between “The Gypsy King” and Anthony Joshua.

The two Brits’ camps are in negotiations in the last few months for a unification bout which seems closer than ever before. Ever since Anthony Joshua took care of his IBF mandatory Kubrat Pulev and made a deal with the WBO mandatory Oleksandr Usyk, now the last thing is the Tyson Fury – Deontay Wilder saga.

The trilogy fight between the two had to take place in 2020, but got postponed several times due to Wilder’s injury and the COVID-19 pandemic.

Eventually, Fury made it clear that Wilder’s rematch clause had expired. He quickly shifted his focus to a high-stakes unification showdown with IBF, WBA, WBO champion Anthony Joshua.

But, Wilder was unwilling to walk away without a fight. He initiated a legal action to enforce what he feels is a valid rematch clause with Fury. The legal dispute has yet to be resolved.

That being said, Eddie Hearn has been assured once again that Wilder will not derail the biggest boxing fight in the last 20 years.

“We’ve been assured by them, that’s not going to be an issue in making this fight. I do believe that Deontay Wilder, he was supposed to be fighting in January. Now we’re middle of February, so how much longer is he going to wait? He’s been out of the ring for a year now, and he’s slowly imploding in every single interview that he gives. He should get back in the ring.

“That’s a Fury problem, a Team Fury problem. We’re confident that it won’t impact our fight, or the announcement. I keep saying two weeks (until an announcement). I’m bored of saying it now. People are bored of probably hearing it, but we are finalizing the finest details of the contract and hope to make an announcement soon.”

Fury’s co-promoter, Frank Warren, is also holding a strong belief that Wilder will not prevent the showdown with Joshua.

“We don’t believe it will affect the fight,” Warren told Sky Sports.