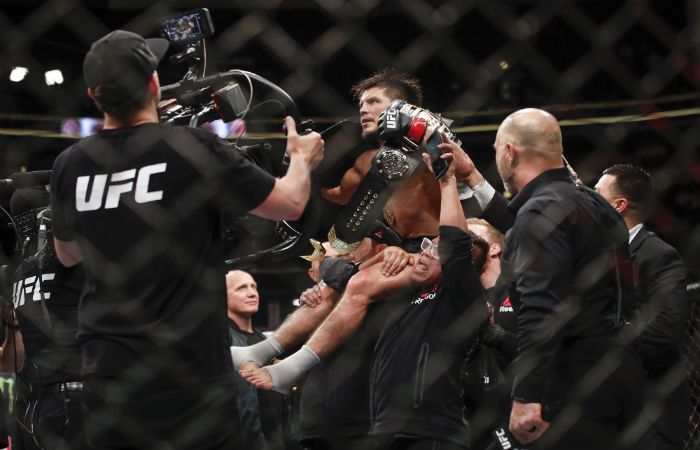 Henry Cejudo had a stunning performance to defend his title at UFC 249 and then he followed that up with a shocking announcement afterwards.

The reigning bantamweight champion stopped Dominick Cruz with a devastating knee strike that put arguably the greatest 135-pound fighter of all time away in the second round. A few moments later, Cejudo took to the microphone to announce that would be the last fight of his career.

“I’m happy with my career. I’ve done enough in the sport,” Cejudo said when speaking to UFC color commentator Joe Rogan. “I want to walk away and enjoy myself. I’m 33 years old. I have my girl back home. I eventually want to start a family. Since I was 11 years old, I’ve sacrificed my whole life to get where I’m at today. I’m not going to let nobody take that from me so I’m retiring tonight.

The announcement came after a statement performance against Cruz, who was returning to action following more than three years off due to injury. Cejudo looked in prime form as he attacked the former champion with a barrage of leg kicks early, which began slowing down Cruz’s typically hyper movement that has confounded so many of his past opponents.

The attacks led to a strong start for Cejudo but Cruz began finding better timing with his combinations in the second round. The exchanges were much more even but Cejudo continued to bide his time looking for the perfect opening to unleash his best shot of the fight.

That came when Cruz ducked his head momentarily and Cejudo made him pay with a knee straight up the middle that landed flush. Cruz was dazed as he crashed to the canvas with Cejudo immediately following him to the floor.

Cejudo chipped away with a series of unanswered punches and the referee quickly jumped into stop the fight. Afterwards, Cruz popped to his feet to protest the stoppage, although he still paid homage to Cejudo for a job well done.

“I’m not happy with the stoppage obviously,” Cruz said. “I was definitely still aware of what was going on. If I’m standing up to my feet, I’m in the fight. I got no excuses. I shouldn’t have gotten caught with that knee the way that I got caught.”

While the loss was obviously disappointing, Cruz wasn’t ready to make any decisions about his own career.

As for Cejudo, if this really does spell the end for him, he walks away as the reigning bantamweight champion after previously serving as a two-division title holder in the UFC on top of the gold medal he earned at the 2008 Olympic games.