Holloway on Conor McGregor’s recent troubles: “He’s human just like all of us” 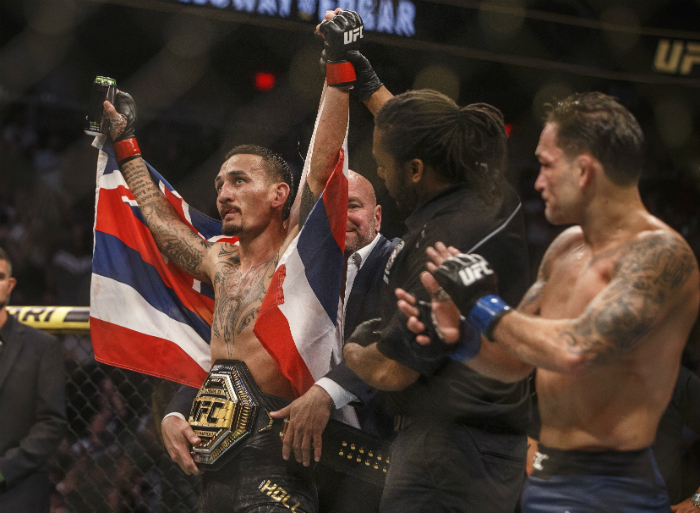 The MMA superstars, Holloway and McGregor, had originally squared off in August of 2013, with the Irishman emerging victorious by way of unanimous decision.

It was a solid three round battle, one which left the soon to be Irish star full of praise for the Hawaiian.

Due to their seemingly simultaneous timelines of success, many fight fans and analysts have always hypothesized as to how a rematch between Max Holloway and Conor McGregor would play out.

The Hawaiian and the Irish superstar have continued to trade jabs on social media ever since their first encounter, but according to Holloway it is nothing personal.

“The way he talks is business, and business is business,” Max Holloway told MMA Fighting. “I understand that point of business with someone. There might be a point where you cross a line where it’s not business anymore and it gets personal but he never did that. He never crossed that line. That’s what I respect about him. We do jab back and forth but it’s just business. We’re not taking any real jabs at anything real crazy. We didn’t cross that line.”

Holloway was quick to point out that despite their subtle jabs on social media, Conor McGregor was always there to support him when he needed it.

“[Conor] was the first one that asked me, that tweeted how everybody was saying this stuff [about the fight being cancelled] but nobody was asking about how I was when the whole [Khabib Nurmagomedov] thing happened,” Max Holloway said when referencing how he was pulled from a lightweight title fight on short-notice. ”When the July thing happened [with Brian Ortega] and then even walking out to the Frankie Edgar fight, he showed me support. He has a heart.”

Conor McGregor has had a tough year in 2018, making headlines for smashing a fans phone and taking a swing at an elderly man at a Pub. Despite his poor behavior in 2018, Holloway has not intentions of kicking ‘Mystic Mac’ while he is down.

“He’s human just like all of us. He had some bad, unfortunate events happen,” Holloway said. “He was just doing the wrong stuff at the wrong time and it sucks but dude is human. That’s just it.”