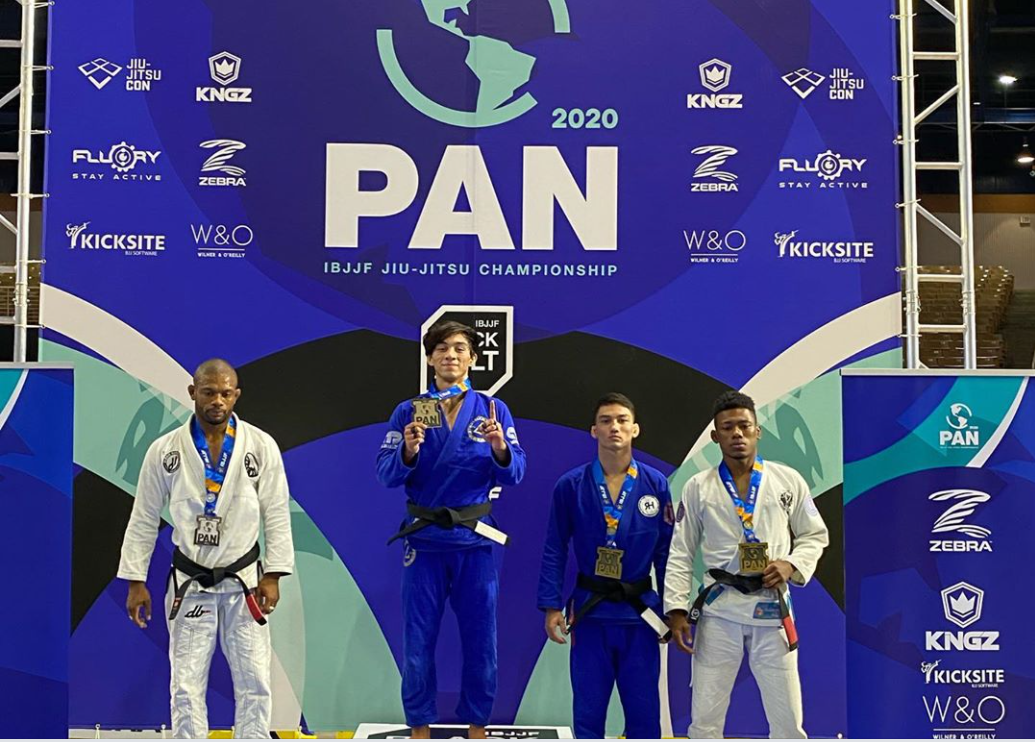 This year’s IBJJF Pan Championship has concluded. Over the past few days, we’ve seen some of the top jiu-jitsu athletes in the world testing themselves in one of the most elite tournaments known in grappling, and now, this year’s champions have made their mark on BJJ history.

1st – Lucas Pinheiro
Though Andrade displayed excellent defensive skills throughout the match, Pinheiro kept his pressure down and earned his place at the top of the podium by an advantage.
2nd – Jonas Andrade
3rd – Santos Rene Bruckner Rivera/ Willis da Mota Nunes

1st – Joshua Cisneros
Cisneros came back from an 0-2 point deficit to tie up the scoreboard and ultimately win the match by advantages. Cisneros is a very new black belt, having just earned the rank in September, and at just 20 years old, this is a very impressive victory for the young champ.
2nd – Pedro Clementino
3rd – Elijah Rueben Tagalog/ Taniel Santos de Jesus

1st – Thiago Macedo
Macedo came up from guard, scooped up Gabriel’s leg, and persisted until he got his opponent to the ground and collected the two points that would ultimately win him the match and the championship title despite a close choke attempt from Gabriel in the last minute.
2nd – Matheus Gabriel
3rd – Ricar Nogueira/ Samuel Nagai

1st – Johnatha Alves
A sweep from Alves put points on the board, and Liera reclaimed them with a sweep of his own with about 4:30 left to go. Alves managed another sweep to bring the score to 4-2, and despite a last-second takedown from Liera, Alves claimed gold for the lightweight division.
2nd – Michael Liera Jr.
3rd – Jonnatas Gracie/ Renato Canuto

1st – Ronaldo Junior
Junior put the first four points on the board, and though Nagai gave himself a chance with a sweep, Junior managed to come back up and score an additional two points. Junior controlled Nagai until time ran out, taking home the win with a score of 6-2.
2nd – Jackson Nagai
3rd – Gutheirry Barbosa/ Lucas Valente

1st – Otavio Sousa
Sousa delivered a dominant and aggressive performance in the finals, taking Luna down multiple times and keeping his opponent from getting any points. He claimed a well-earned gold with a score of 6-0.
2nd – Matheus Luna
3rd – Gabriel Almeida/ Manuel Ribamar

1st – Gustavo Batista
Batista played guard for the first half of the match, coming up for a sweep in the second half to get ahead by two points. He then got past Bell’s guard and quickly transitioned to the back to bring the score up to 9-0. Despite Batista’s best efforts to finish the match with a choke, Bell defended against the submission and got to his feet, where the competitors stayed until time ran out.
2nd – Dominique Bell
3rd – Horlando Monteiro/ Yuri Allison Paiva dos Santos

1st – Guilherme Augusto
Augusto started off in guard, but eventually came up to reverse the position and earn the first two points of the match. He then passed Maidana’s guard for another three points. Though there were a few exciting scrambles, Augusto kept Maidana from putting any points on the board, and he took home the super-heavyweight gold medal.
2nd – Arnaldo Maidana
3rd – Devhonte Johnson/ Fellipe Andrew

1st – Max Gimenis
A persistent Gimenis was ahead 5-1 in a battle of advantages until about 3:30 remained in the match, when he came up for a sweep and earned two points to reinforce his lead. In the last minute of the match, He passed Panza’s guard and earned additional points for a knee ride. Even with a win basically secured, he fought for a back take and earned it in the literal last second of the match, giving him the championship title with a score of 11-0.
2nd – Luis Panza
3rd – Renato dos Santos Tagliari/ Stuart Randle Maddox