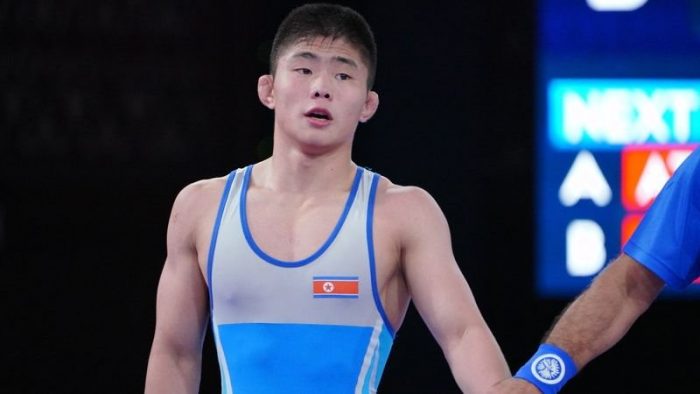 Iran led the parade into the finals on the opening day of competition at the Asian Wrestling Championships, while defending champion Kang Kumsong (PRK) cleared a major hurdle to put himself in position for a title repeat. Iran had three of its five wrestlers in action in the freestyle competition make it to the gold medal matches, to be held later in the evening session.

Reza Atrinagarchi (IRI) will face Kang for the 57kg gold, while Bahman Teymouri (IRI) at 79kg and Reza Yazdani (IRI) at 97kg also went through the afternoon session unscathed. Iran has sent basically an under-23 team, and coach Ebrahim Mehranban said the first day’s performance lived up to expectations. “We predicted that,” he said. “They are younger than before.”

Teymouri will face Parveen Rana (IND) in the 79kg final, while Yazdani will take on Batzul Ulziisaikhan (MGL) at 97kg.

Kang pulled off the win of the day when he scored a late takedown to defeat Paris 2017 world champion Yuki Takahashi (JPN), 3-1, in the semifinals in a repeat of their match at the Asian Games.  Both had scored a point off the activity clock, and Kang was ahead on criteria when Takahashi battled fiercely to score the go-ahead points. But instead, it was Kang who countered the attack and came away with the victory.

India has a second wrestler in the finals in world silver medalist Bajrang Bajrang (IND) at 65kg. He will face Savalbek Okassov (KAZ), one of two wrestlers from his country in the finals.  Nurkozha Kaipanov (KAZ) will face Kojiro Shiga (JPN) in the 70kg final.