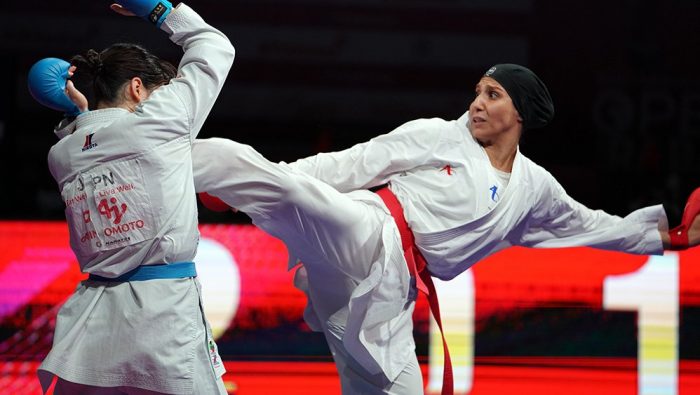 The second Karate 1-Series A event of the season finished in Istanbul (Turkey) with Iranian karatekas topping the medal table and top competitors demonstrating their domination of the categories at stake. Local karatekas Serap Ozcelik and Eray Samdan, Sandra Sanchez of Spain and Iran’s Hamideh Abbasli and Bahman Asgari Ghoncheh were among the big names of the tournament.

After claiming no less than six titles today, Iranian representatives showcased an excellent level in Istanbul. Travat Khaksar opened the gold medal count for Iran with her victory in Female Kumite -55kg. The karateka who had already claimed gold at the opening Karate 1-Series A event in Salzburg took a convincing 5-2 victory over Tzu-Yun Wen of Chinese Taipei in the final.

Hamideh Abbasli confirmed her favourite status in Female Kumite +68kg. The Iranian karateka completed a powerful performance in Istanbul with a 1-0 triumph over Japan’s Ayaka Saito in the final so to take her first gold this year

The third gold for Iranian representatives came in Male Kumite -75kg. Bahman Asgari Ghoncheh used his World champion status to claim an impressive 6-1 victory over Luigi Busa of Italy in the final.

Meanwhile, Mahdi Ghararizadeh Mahani won another gold for Iran and produced one of the biggest upsets of the day after defeating local hero Ugur Aktas in the final of Male Kumite -84kg. Turkey’s fan favourite Aktas had the support from the stands but the promising Iranian karateka took his first-ever gold medal in international competitions with a 1-0 victory in the final. Saleh Abazari in Male Kumite +84kg and the Iranian Female Kata team completed the gold medal count for the Iranian delegation.

Turkish representatives gave local fans plenty of reasons to celebrate with four gold medals. Serap Ozcelik spearheaded the successful performance of karatekas of the host country with her fourth title this year. The Grand Winner who had already taken gold in the Karate 1-Premier League events in Paris, Rabat, and Paris demonstrated her outstanding level with another triumph in Female Kumite -50kg. The local fan favourite defeated Shiau-Shuang Gu of Chinese Taipei by a convincing 4-0 in the final.

Merve Coban claimed the second gold for Turkey with her victory in Female Kumite -61kg. The current European Champion defeated Peru’s Alexandra Grande by 2-0 in the final. Meanwhile, Eray Samdan used his Grand Winner status to reach the top of the podium in Male Kumite -60kg. The young Turkish karateka beat Yerkinbek Baitureyev of Kazakhstan in the final 2-0 and earned his fifth medal in six events this year. The Turkish team with his gold in Male Team Kata completed the gold medal count for hosts.

New names surprised favourites and took the spotlight in Istanbul. Marina Rakovic of Montenegro won her first gold in five years after upsetting World champion Irina Zaretska of Azerbaijan. The karateka from Montenegro who took gold for the last time in the 2014 Balkan Championships took the title of Female Kumite -68kg with a 4-2 victory in the final.

Meanwhile, Kakeru Nishiyama of Japan shocked local representative Emre Vefa Goktas of Turkey in Male Kata. The Japanese karateka succeeded with his performance of “Chibana no Kushanku” kata and a score of 26.46 for 25.08 of the Turkish athlete.

The victory Dionysios Xenos of Greece over Japan’s Hiroto Shinohara in Male Kumite -67kg completed the gold medals in Istanbul. The Karate 1-Series A travels now to Montreal (Canada) where the third event of the season will take place from June 21 to 23.