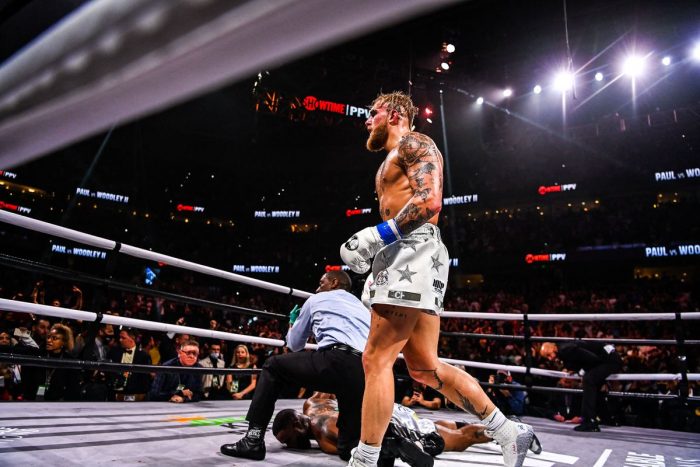 BJ Flores, the head trainer of unbeaten Jake Paul (5-0, 4 KOs), makes it clear that Tommy Fury is not in the driver’s seat of a potential fight.

Fury (7-0, 4 KOs) was scheduled to face Paul earlier this month, in the main event of a Showtime Pay-Per-View in Tampa, Florida.

Two weeks before the fight, Fury officially withdrew with a broken rib and a chest infection.

Fury was quickly replaced by former UFC champion Tyron Woodley, who lost an eight round split decision to Paul in August.

This time around, Paul pulled off a dramatic one-punch knockout of Woodley in the sixth round.

While Paul vs. Fury seems like a logical fight to make in 2022, Flores believes his fighter has other options out there.

Fury, the younger brother of WBC heavyweight champion Tyson Fury, has been out of the ring since an August decision win over Anthony Taylor.

“I really don’t have any comment on Tommy except he missed out on a massive opportunity, whether he was sick, had bad luck, or whatever it was. It’s a massive opportunity and probably one he’ll never get again, that would have been, for sure, the biggest payday of his career,” Flores told The Sun.

“Even if he went on to be a champion, it’s very unlikely he would have made that money again, in any fight in his career. We’ve got other names on the resume, to be honest with you. Other big names on the radar, bigger names than Tommy that are coming up, so I’m not sure [if that fight will happen next].

“And it doesn’t really matter to me, to be honest. Tommy was neither here nor there, I didn’t care whether it was Tommy or not. Jake definitely doesn’t need the ‘opportunity’ to fight Tommy, Tommy was the one getting the opportunity more so than Jake.”