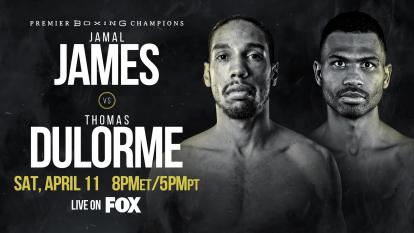 Jamal James and Thomas Dulorme figured to be well-matched main event opponents as Premier Boxing Champions returned to FOX airwaves tonight from Los Angeles, and that was more or less the case, but James pulled away in the second half of the fight to secure a decision win and take the interim WBA welterweight title.

James (27-1, 12 KO) notches his seventh straight win following a 2016 then-upset loss to Yordenis Ugas, which has aged pretty well as Ugas has since then turned into one of the best and probably the most avoided fighter in the welterweight division.

Dulorme (25-4-1, 16 KO) was competitive as he usually is, but the 30-year-old Puerto Rican once again came up a bit short in a big opportunity, as James just out-worked him and landed too many shots, particularly in the second half of the bout, as Dulorme began to fade, leading to several verbal assaults between rounds as trainer Joel Diaz tried — and seemingly largely failed — to motivate his fighter.

James, 32, is now pretty officially “in the mix” at 147; even if you don’t have him as a top 10 guy, and the highest you could really reasonably have him is No. 8, he’s on a good run, has a good-looking record, and while interim titles don’t usually guarantee anything in boxing, it does mean he’s got the attention of the WBA.

For what it’s worth, the WBA’s “super world” champion at 147 is Manny Pacquiao, and their currently vacant “world” title — which shouldn’t exist, but that’s another story — will be up for grabs on Sept. 6 between the aforementioned Ugas and Abel Ramos. It’s not inconceivable that we could wind up with an Ugas-James rematch by the end of 2020 or in early 2021. (They also have a “gold” title, held by Vergil Ortiz Jr, if you want to complete the set here.)

Juarez, a 21-year-old junior welterweight prospect from Brownsville, Texas, improves to 8-0 (4 KO) with a clear if not exactly thrilling decision win over Shaw (12-2, 8 KO), a 28-year-old from California whose approach to boxing is don’t get hit, but without the “hit” part that usually comes in front of that old chestnut.

There is some value in a young fighter facing someone like Shaw, who is athletic and a little slick but doesn’t throw enough back to be any real danger. You get some rounds in with this guy and get some different looks, but it’s not particularly fun to watch, no. But Juarez passed the test, winning on scores of 58-56, 59-55, and 60-54. BLH had it 59-55 and 60-54 for Juarez.

This was for an interim WBA title at 168 pounds, with the top Cuban prospect Morrell (3-0, 2 KO) getting a bit of a test here against Allen (22-1-1, 14 KO), a 35-year-old veteran who had never really faced anyone but proved himself capable and crafty, if a bit over-matched against the 22-year-old Morrell’s skill set.

Morrell has good skills, obviously still young and developing, and no matter what trinket you put up here, Allen is a long ways off from the true class guys at 168 pounds, but this is a promising young fighter and obviously has some gifts, great amateur experience in the Cuban system, and he fights — at least so far — with a real confidence. We’ll see how he does moving up the ladder, but he might also spend another 5-10 fights at right about this level, too, depending on what comes up.

Santamaria, who was taking a big step up in competition, said he was going to put pressure on the much taller Fox, who scales just under 6’4” as a 140/147-pound fighter, with Santamaria not small for the weights at 5’8” himself, but still giving up a ton of height.

Fox never quite worked effectively at range, and Lennox Lewis felt this perhaps gave judges the impression that, even though he was landing some good stuff in close, Fox was fighting the wrong fight, which he was, and thus losing, which was more debatable.

CompuBox numbers were about as close as you can get overall here, but Santamaria did have something of an edge in power punches, and did some nice body work. BLH had it 95-94 for Santamaria, while the official judges had it a wider 96-93, 97-92, and 99-90.

As mentioned, Fox had a bit of a breakout year in 2019, losing a controversial decision to Shohjahon Ergashev before upsetting former Olympic gold medalist Fazliddin Gaibnazarov, and he closed out the year with wins over Eudy Bernardo and John Arellano, too. He was looking like a potential real problem at 140, but he needed to fight and just ran into a guy who had the right plan. Santamaria is now someone to keep in mind at 147, as he has a loss, but it came in 2015, when he was 17 years old and a baby in the game. He also drew with Marquis Taylor in June 2019, but this marks a second straight win for him and something to springboard from if he can do it.