Jan Blachowicz overpowers Israel Adesanya and cruises to a decision 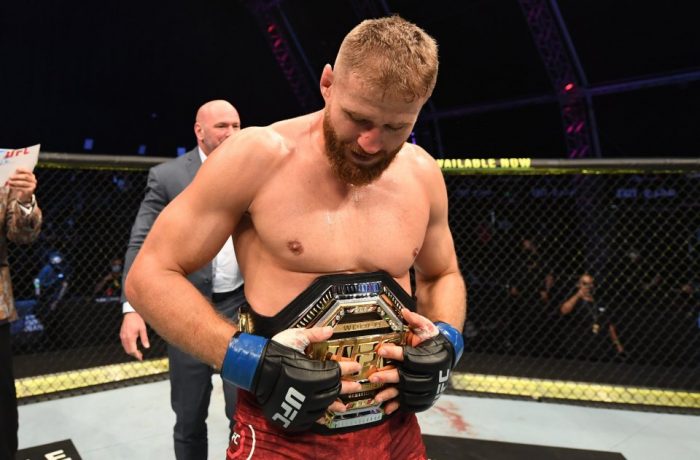 Jan Blachowicz came into his first title defense as the underdog to Israel Adesanya but after five hard fought rounds, he left the UFC 259 main event with the light heavyweight title still around his waist.

It was a grueling battle for all 25 minutes with Adesanya relying on his speed and accuracy while trying to keep the fight at a distance but Blachowicz was eventually able to showcase his strength and power advantage as well as a suffocating grappling game that allowed him to win a unanimous decision.

The final scorecards read 49-46, 49-45 and 49-45 as Blachowicz retained his title while thwarting Adesanya’s attempt to become a two-division champion.

Takedowns in the fourth and fifth rounds really did change the momentum for the entire fight as Blachowicz got on top of Adesanya and the middleweight champion just did not have any hope to escape. Blachowicz was suffocating while putting pressure on Adesanya and battering him with punches to help him secure the victory.

In the early going, Adesanya was measured with his output while chipping away at Blachowicz from the outside. Adesanya was cautious to avoid the power coming from the Polish champion but he began establishing a slick jab and a few kicks to the legs to help set up future combinations.

After a tentative first round, Blachowicz started to gain confidence in his punches after unleashing a couple of hard right hands that got Adesanya’s attention. In return, Adesanya continued to tag him with inside leg kicks and then tossing out a fast jab to keep Blachowicz on the end of his punches as much as possible.
Adesanya was obviously disappointed with the outcome but he promised this wouldn’t be the last time he would compete at 205 pounds in the UFC.

“I thought I was going to win. It didn’t go exactly the way I wanted it to go,” Adesanya said. “That was just my legs being fatigued. I knew what to do and I was trying to do it. It’s like a bad day at the game except it’s in the office tonight.

“I definitely will be back. Dare to be great. Going back to 185 and I’m going to rule that b*tch with a black iron fist.”

As for Blachowicz, he will now turn his attention to the No. 1 contender in the light heavyweight division as he expects Glover Teixeira to be his next challenge.

“I think he deserves that,” Blachowicz said when addressing Teixeira. “I would like to fight against Glover next. He deserves it.”