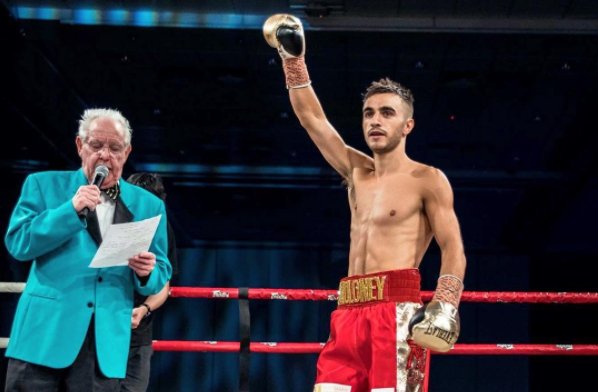 After seeing his twin brother Andrew lose an upset two days ago to Joshua Franco, the pressure was on a bit tonight for Jason Moloney, and the bantamweight contender from Australia stepped up, stopping Leonardo Baez after seven rounds in tonight’s Top Rank main event on ESPN.

Moloney (21-1, 18 KO) and Baez (18-3, 9 KO) both came to fight here, but Moloney, 29, was simply the better man, battering Baez en route to the stoppage win, with Baez’s corner pulling the 24-year-old Mexican out of the fight when Baez said he wasn’t able to breathe well.

It’s worth noting that Baez took this fight on pretty short notice, as original opponent Oscar Negrete pulled out with an eye injury just 11 days ago, but he was a very good replacement option, and gave it his best. He’d been on a nice winning streak and fighting well, but Moloney just had too much for him.

“I just wanted this so bad. I’m so driven and so dedicated, I wanted this so much,” Moloney said after the fight. “It’s the biggest opportunity of my career. I’m so happy now, this is the best moment of my career. This is a big, big step towards me fighting for another world title. I want that dream so bad.”

Moloney did fight for a world title in his U.S. debut in 2018, losing to Emmanuel Rodriguez in Orlando, which was also a first round World Boxing Super Series tournament bout. It was a very close fight, easily could have gone the other way, and Moloney remains a legitimate contender at 118 pounds. He feels tonight’s performance sent a message to the titleholders at bantamweight.

“I think I sent a big message,” he said. “I knew Leonardo Baez was going to be a really, really tough challenge. He’s an absolute warrior, as you just saw. He pushed me hard, but I showed how bad I want this. I’m ready for any of the champions at 118.”

The champions at 118 are currently Naoya Inoue (WBA and IBF), John Riel Casimero (WBO), and Nordine Oubaali (WBC). Inoue is a Top Rank fighter, and was meant to face Casimero in a unification bout in April. There’s still some hope that fight can happen this fall, but obviously no guarantees, with Inoue in Japan and Casimero in the U.S. right now.