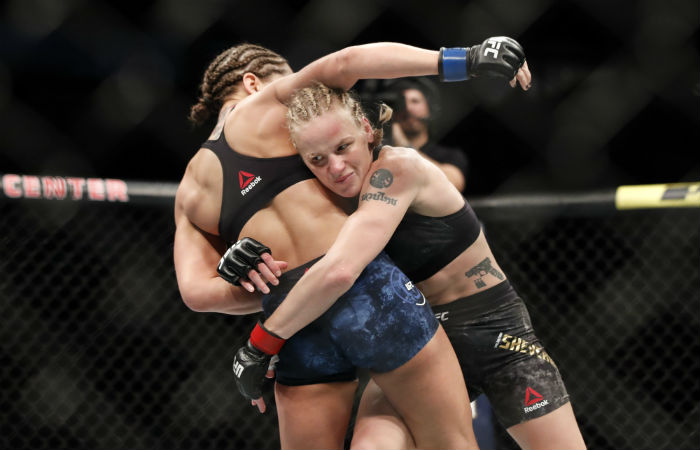 Jessica Eye’s UFC adventure has had its fair share of bumps in the road and apparently the past 14 months have been no different.

Eye claimed she had her gallbladder removed after experiencing “chronic stomach pains.”

“The morning of weigh-ins was Day 0 for my gut health as well as my overall health,” Eye wrote of her experience before the June 8 encounter. “It first began with sharp pains in my right side, lightheaded that would cause black spots in my vision, painful spontaneous bathroom visits even with/without consumption of food, brain fog, and other unpleasant side issues that showed its ugly face to me.”

“At the time I just chalked it up to so many things: moving to Vegas, leaving Strong Style and the stress that it left with me. Reinjuring my back. New training system and skill set that was overwhelming me. I just assumed it was part of the new changes that were occurring in my life and eventually my body would adjust. It never happened.”

“Again, fight week was harder than it ever should be,” Eye wrote. “So then it happened, my worst fear in this industry. I missed weight, devastated, mortified, repulsed by myself and to others [it] just looked like I didn’t care [about] my opponent or my career. To say the least, if you actually know me that couldn’t be far from the truth of who I am to the core let alone what I consider acceptable as well.”

“Post-fight I would face many challenges within my team. The opinions of what I need to do moving forward would drive me away and push me deeper into this sad and lonely place. I just felt like I was dealing with something different than everyone else and no one understood.”

Eye went on to defeat Araujo, but her problems didn’t end there.

The COVID-19 outbreak in March and the ensuing quarantine only made things more difficult for Eye, who then accepted a fight with Cynthia Calvillo that would headline UFC on ESPN 10 on June 13.

“I idiotically said yes as well as my team,” Eye wrote. “However, I was not as honest with my health and my team about it. Again, I chalked it up to so many other things and with my larger-than-life personality I thought [let’s fu**ing go] girl you can do this! Turn it all around and do epic stuff.” “Well, I did epic stuff that’s for sure. I missed weight and lost a fight I should have won. My lackluster performance was how I knew finally I was dealing with something bigger than missing weight, chronic stomach pains, and brain fog. The fight was on June 23 and no later than July 5 I would find myself in the hospital and no longer being able to handle the pain anymore. I then would start this healthy journey that still seemingly doesn’t have an end yet.”

“It is now Sept. 1 and I am in need of help,” Eye wrote. “I am not sure where to turn right now with what to do next. I feel the doctors took out my organ and just said, ‘Figure it out.’ I am struggling deeply to eat, feel good, and get back to any type of physical activity. I don’t know what to do anymore and I feel I am inadequate to get myself through this and be able to return to normal life and the octagon!”

“If anyone can point me in directions to get help, I am begging. I just don’t know what to do now and I don’t want to just give up.”