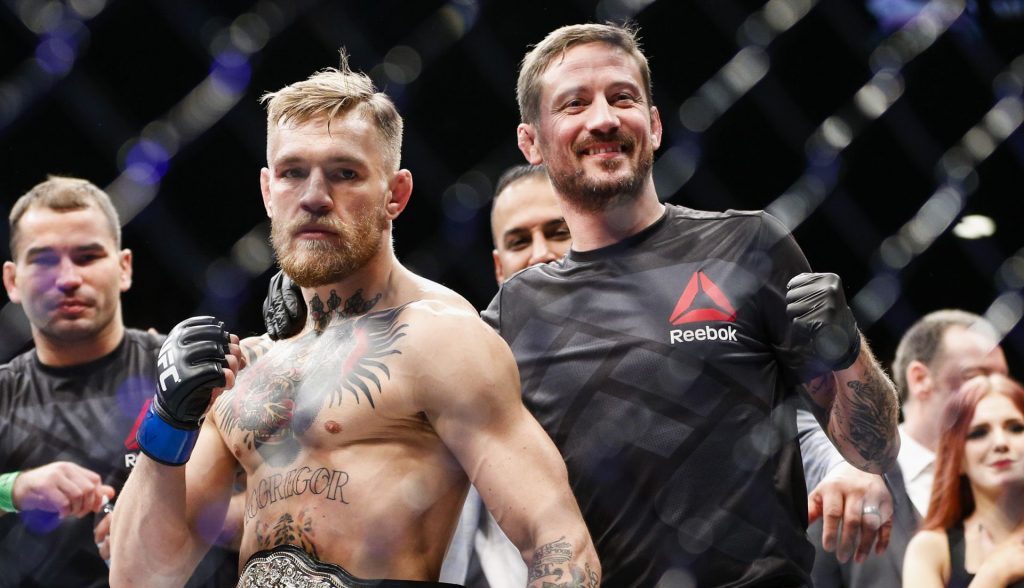 Conor McGregor’s head coach – John Kavanagh, is pretty sure his fighter will be a different animal in his next fight.

SBG head coach and trainer of “The Notorious” has been with Conor since his early days and if someone knows what has to be done in order for us to see the old McGregor, it’s John Kavanagh.

The Irish superstar got TKO’d in his rematch with Poirier at UFC 257 this January and it unleashed thousands of questions about the mentality of Conor and his desire.

Even though there’s nothing official yet, it’s pretty obvious that “The Diamond” and Conor will face each other for a third time this summer. “He is in great spirits, well he actually sold the spirits so he is in really good financial spirits. He is just looking forward, I’m hoping we can get that rematch done in the summer,” Kavanagh said to BT Sport of McGregor-Poirier 3.

“I’m not exactly sure, I don’t involve myself in the management side of things. We wanna get that one back, gotta figure out these fricking calf kicks, how to use them and defend them. We’re pretty confident we have that sorted out now. He looked excellent everywhere else. Give us a rematch, and we have the rematch, I feel.”

“It definitely has an effect, would it have had enough of an effect to change that fight? I don’t think so. Fair play to Dustin and Mike (Brown) and the guys,” Kavanagh said of Conor McGregor’s loss. “Even when he was getting clocked, he got hit a couple of times hard but he still didn’t start getting into a trading war or try and gas himself out trying for takedowns. He had this plan, that he had the check hook and they had had the calf kick and they were just going to keep doing it and hope it would work, and it did.

“I don’t think any amount of pre-fight shenanigans would’ve changed that or any interview requests or any screaming fans,” Kavanagh continued. “We have to fix that technical detail, which it’s not like having to fix everything, it’s fixing a small enough area. Get that back into the whole game, not going in with a sort of with a boxing mentality, going in with an MMA mentality.

“Conor was always famous for his movement, his ability to change stances, his bounce as he would say. We got to bring that back. It’s there, it’s under the hood, it’s not skills that have to be learned or relearned, they just have to be re-ignited,” Kavanagh concluded about McGregor’s training for Poirier. “We have already started that process. So, wouldn’t it be great to do it again in the summer, maybe in Vegas in front of 20,000 screaming people if we can get the world back open again.”