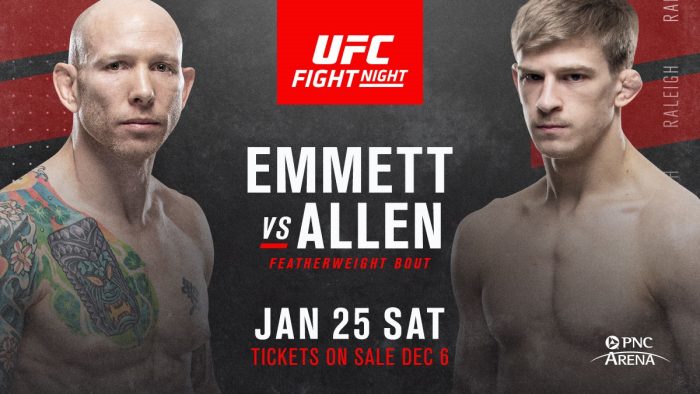 Arnold Allen puts his six-fight unbeaten on the line when he faces Josh Emmett at UFC Raleigh.

The UFC announced the news yesterday. UFC on ESPN+ 25 marks the promotion’s return to the state of North Carolina for the first time since January 2018, and it is also their first visit to the state’s capital Raleigh.

Since suffering a devastating KO loss to Jeremy Stephens that sidelined him for over a year, Emmett (15-2) has rebounded by scoring a third-round KO over Michael Johnson and a first-round finish against the gritty Mirsad Bektic that earned the Team Alpha Male fighter a $50,000 performance bonus.

Having faced visa issues in the past that stopped him from fighting outside of Europe, Allen (15-1) fought for the first time in America earlier this year when he won a unanimous decision against Gilbert Melendez at UFC 239. The 25-year-old has gone 6-0 since signing for the UFC in 2015.

UFC Raleigh takes place on January 25th at the PNC Arena in Raleigh, North Carolina. A heavyweight fight between Curtis Blaydes and Junior dos Santos is set to headline the card.