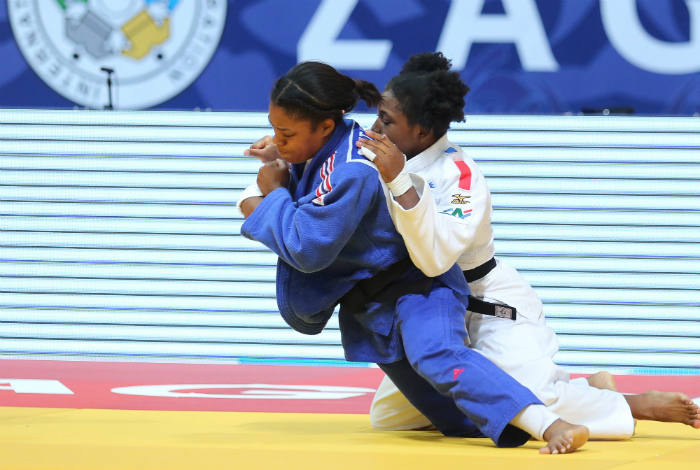 In November 2020, the International Judo Federation will celebrate the 40th anniversary of the first Women’s World Championships, which took place in New York, USA, in 1980. Here is Loretta Cusack-Doyle (GBR) memories about this historical event.

“The world is a richer place with women’s judo,” by Loretta Cusack-Doyle

My reflections on 40 years ago and my bronze medal at the first women’s world judo championships in 1980 are those of a naive 17-year old girl; a North Londoner who earned a living on a stall in Islington market during the day, but trained every morning and evening in the sport of judo, which was the love of my life. I was at the beginning of my senior judo life and this was only my third senior international tournament. Here I was about to take part in the first Women’s World Championships, watched globally by millions.

Madison Square Garden, as a venue, announced to the world that women’s judo was serious. This venue had hosted the first Muhammed Ali v. Joe Frazier fight and was the home of entertainment superstars ranging from Sinatra to Elvis Presley, Elton John to Led Zeppelin. Nowhere could have been more exciting for a 17 year old girl like me than this place at this time. The event was televised as a ‘CBS Sports Spectacular,’ not just across the USA but the whole world.

I had just left school with limited academic achievement, but I excelled in sport and physical exercise. Importantly, against all the reasoning of parents and teachers, I had a single-minded obsession to make judo my full-time job. I was told this was an impossible dream, especially for a woman, but this all changed when I met and became friends with the renowned Rusty Kanokogi; the woman whose drive and passion for the sport of judo made this first women’s world championships possible.

One cannot write an article about the first world championships without mentioning Rusty and her story is truly remarkable. For me, though, she was more than just a superstar and more than just the sum of the many anecdotal stories that support her unquestionable right to be regarded as a sporting legend. She was a woman I got to know as a friend, who understood me and my aspirations within judo, as a woman. She told me to ignore the doubters and follow my heart and passion. She gave me immense support, encouragement and inspiration with her words and the interest she showed in me. Many believe that Rusty was a classic women’s rights activist and indeed, her track record of breaking down barriers for women’s judo supported this, but Rusty did not look at it that way, “It had nothing to do with burning your underwear,” she said. “I knew women were ready to compete, so why shouldn’t they have that opportunity?” I felt the same way. I didn’t want to have my full-time job in judo for political reasons, but because I wanted to win and to become the best I could be in my sport. To do so, I had to make a living from it.