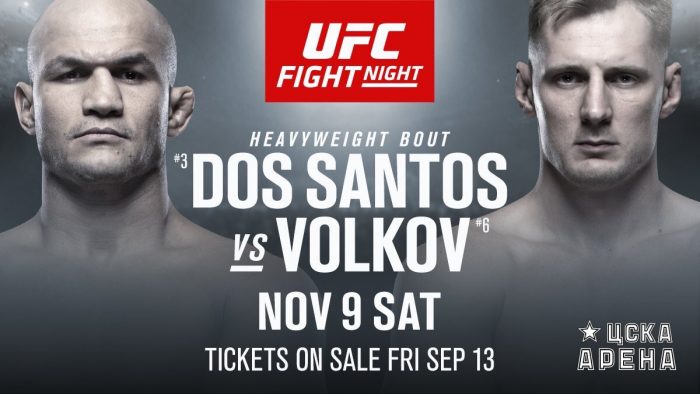 Junior Dos Santos was forced out of his UFC on ESPN+ 21 headliner vs. Alexander Volkov because of a bacterial infection in his leg, which he revealed could have been life threatening.

Speaking to Yahoo! Sports’ Kevin Iole, Dos Santos (21-6 MMA, 15-5 UFC) gave an update on his situation from the hospital bed on which he’s been laying for the past eight days.

“Actually, this whole thing was kind of a big surprise for me and actually, I don’t really know how I got this bacteria on my leg and how it was there,” Dos Santos said. “This whole thing happened, but it started on Friday. Friday I was training. I was kicking the heavy bag, and everything was fine. On Saturday, I started to feel a little pain on my leg, and I treat it like I always do: I put some ice, and I took some anti-inflammatory, and I thought everything will be fine. But on Sunday, it was getting worse and worse, and my leg was getting hotter and painful, and also it was getting very red, so I said ‘something is wrong here.’”

“Cigano” was advised by his doctor to go to the hospital on Monday. He was diagnosed with cellulitis, which could have spread to the rest of his body if he didn’t treat it on time. He kept quiet in hopes that the infection would heal in time for Nov. 9, but doctors didn’t like the idea of him traveling halfway across the world to compete.

Should he have gotten hit on his infected leg, it could have had serious consequences.

“I thought I would heal in the right time, and I would be able to go to the fight, but they said ‘no, you’re crazy,’” Dos Santos said. “Because even if you go, even if you get better, you’re going to Russia, to like another far away … if anything happens, you have nobody there to take care of you, and if you get hit on top of this thing, you can lose your leg at the minimum.”

Dos Santos, the former UFC heavyweight champion, is coming off a first-round TKO loss to Francis Ngannou in June, which snapped his three-fight winning streak. An apologetic Dos Santos expressed his disappointment for having to pull out and the consequences it had not just on him, but Volkov.

“I feel very sorry not just for me but even for Volkov, because I know everything what it takes to get prepared for a fight,” Dos Santos said. “It’s a lot of investment, not just financially, but your time, your life, your everything.”

Dos Santos hopes he won’t be sidelined for too long but was advised to take his time healing from the infection.

“I don’t think I’m going to take too much longer to recover from this,” Dos Santos said. “Maybe 15 days I’ll be fine already, like the doctor said, but I have to start everything again.”