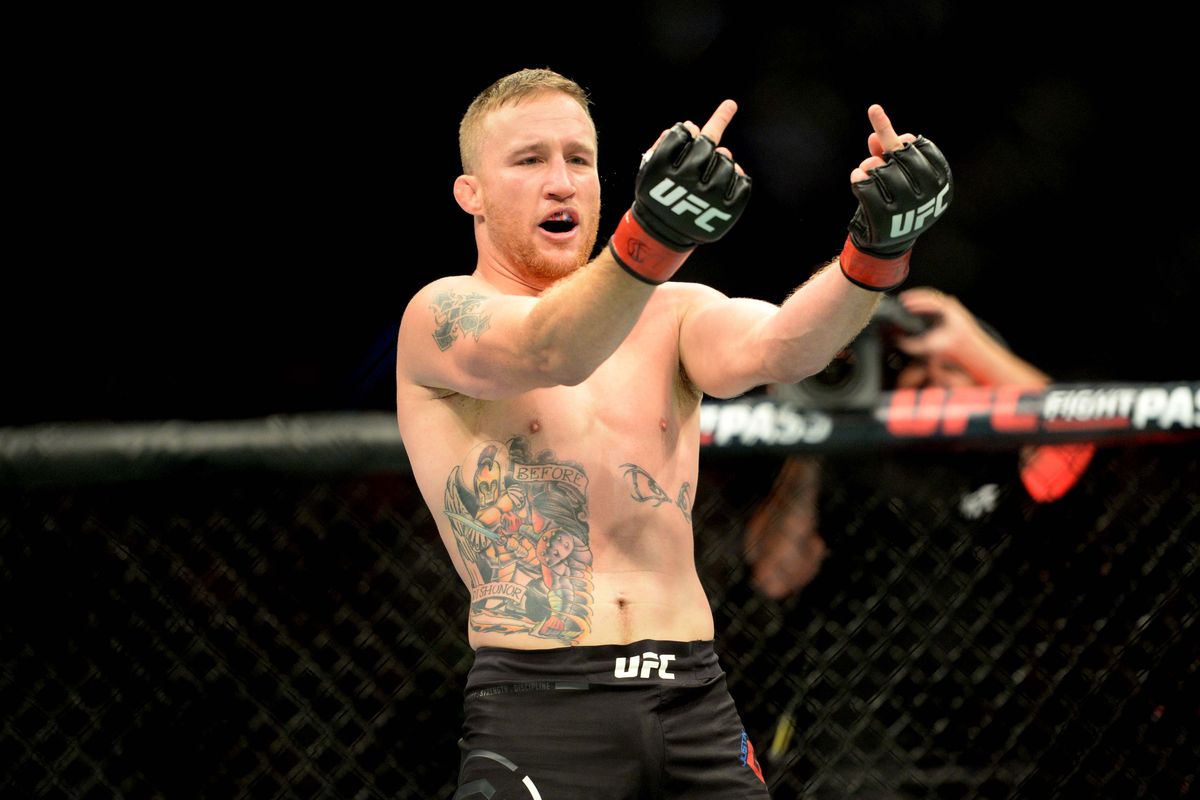 Justin Gaethje is gunning for gold after another guaranteed Fight of the Night performance at UFC 268.

In a matchup that will surely be remembered as an all-time classic, Gaethje went to war with Michael Chandler for three rounds as both fighters unloaded with devastating offense in some of the wildest exchanges in recent history. Gaethje’s ability to weather the storm and just punish Chandler with a massive uppercut as well as his damaging leg kicks allowed him to secure the victory with the judges scoring the fight 29-28, 29-28 and 30-27 in his favor.

“I knew exactly what that motherf*cker was. He is a warrior,” Gaethje said after the win. “We are living in the wrong times. Me and him should have been fighting to the death in the f*cking Coliseum.”

The lightweights were dropping bombs as soon as the fight started with Gaethje looking for his signature leg kicks and Chandler countering back with some of his own. Chandler started to establish his jab and then following behind it with a powerful punch behind it that was landing on Gaethje’s chin.

A blistering right hand cracked Gaethje and put him on wobbly legs as Chandler rushed forward looking for the finish but he made the mistake of standing in front of the human highlight reel, which allowed the former interim lightweight champion to fire back with some hard shots of his own.

As the round moved into the final two minutes, Gaethje was still pouring on the punishment with a volume of strikes as Chandler started to slow down after such a fast start.

Chandler tried to calm down at the start of the second round, tossing out the jab and not pursuing Gaethje with as much reckless abandon. The game plan was paying off until Gaethje unloaded a huge uppercut that sent Chandler down to the canvas in a heap.

Gaethje attempted to follow up for the finish but Chandler grabbed onto a leg to look for a takedown in order to survive the onslaught. The fighters finally made it back to the feet and Gaethje was once again on the attack with the leg kicks with Chandler nursing a mangled face thanks to several cuts.

Despite the damage absorbed, Chandler was still swinging with everything left in the tank as he attempted to storm back but Gaethje wasn’t going anywhere. Again and again, Chandler was waving Gaethje forward as they were just blasting each other with nasty punches.

As time ticked away to the final horn, Gaethje was just unleashing powerful punches followed by the same calf-kicks that left Chandler with a lead leg that was at least five different shades of purple and blue. When it was over, Gaethje and Chandler embraced after bringing the best out of each other for 15 consecutive minutes.

With the win, Gaethje all but secures his spot as the next person in line for the lightweight title as he awaits the winner of the upcoming bout between Charles Oliveira and Dustin Poirier at UFC 269 in December.

“Hopefully it’s [Charles] Oliveira down in Brazil or Poirier in Louisiana, I don’t give a f*ck,” Gaethje shouted. “I’m ranked No.2 . I just got an impressive win. Of course, who else? D.C. (Daniel Cormier) ain’t out here so I’m the only motherf*cker left.”