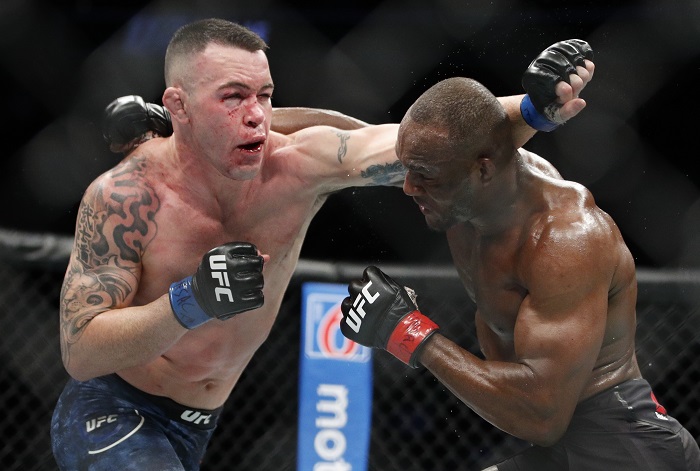 Nothing came easy for Kamaru Usman but the reigning welterweight champion still left UFC 268 with the title wrapped around his waist despite a valiant effort from Colby Covington.

What looked like a potential blowout when the action started turned into a very close fight by the end with Usman gutting out a few more punches in some key exchanges to stay ahead on the scorecards. The judges scored the fight 49-46, 48-47 and 48-47 with Usman retaining his title in a five-round decision over Covington.

Afterwards, Usman and Covington actually embraced as they appeared to put the animosity between them to bed, at least for a few minutes.

“I gotta give it up,” Usman said when addressing Covington after the fight. “There’s a lot of trash talk. There’s a lot of bad blood here and I’m sure there’s still going to be some after tonight, but this guy’s a tough son of a b*tch. He’s tough as sh*t.”

Unlike the first fight, Covington rushed forward with an early takedown attempt in order to use his wrestling this time around but Usman was quick to counter in order to get back to the feet. As Usman was looking to establish his jab, Covington was throwing strong punches in succession to keep the champion guessing.

Usman was a little more reserved with his combinations but he did manage to clip Covington with a shot that opened a gash under his right eye before the first round ended.

While Covington was active on the feet, Usman was still connecting with the harder shots as he went headhunting and then also digging hard to the body. Late in the second round, Usman continued his pursuit and it paid off after he clipped Covington with a short left hook that rattled the former interim champion.

Usman followed that with another devastating left that put Covington down hard and it appeared he might be headed for a finish but time ran out before he could really add much more damage on the ground.

When the third round got started, Covington attempted to alter course while staying more patient with his strikes but he always seemed to be a step behind Usman in the exchanges. Covington had his best moments when he lunged forward with a combination that caught Usman off guard before rushing ahead to drag the fight to the ground.

As time passed, Covington actually started landing with more regularity on the feet when he was a little more willing to just let his hands go. He cracked Usman several times with a variety of punches and it was clear Covington’s confidence was starting to swell.

A hard kick to the body was also effective for Covington as he started to force Usman to engage more in the exchanges.

With five minutes remaining, Covington was staying busy and he stuck Usman with a hard uppercut and then followed with a takedown attempt. Usman was able to shrug him off and reset on the feet where he was once again looking to land the jab but Covington was showing much better defense than the early part of the fight.

Usman never backed down as he was still stinging Covington with solid punches but he was also much more wary because his opponent was showing a lot more power than last time out. After the final horn sounded, Usman seemed confident in his victory but Covington gave him everything he could handle over 25 minutes.

“I wanted to get crazy and I wanted to get him out of there but I knew with a guy like this, he’s going to creep back in there and we’re going to end up in a situation we don’t wanna be in,” Usman said.

“When you share an octagon with someone this tough. You can’t help it. You know that respect is going to come.”

Never one to bite his tongue, Covington paid credit to Usman on a job well done and getting the better of him on Saturday night.

“I had my moments,” Covington said. “I wobbled him a couple of times at the end of the round. I wasn’t able to capitalize. It was his night. He had a better night. Love me or hate me, I’m just getting started. You haven’t seen the best of Colby ‘Chaos’ Covington yet.”

Dispatching Covington a second time, Usman has now defended his welterweight title five times and the list of contenders left to challenge him is seemingly shorter by the day. Following his latest win, Usman declared “I am the pound-for-pound best alive right now” and it’s nearly impossible to imagine anyone would argue with him about that.