Kamaru Usman not sure who’s next after Jorge Masvidal 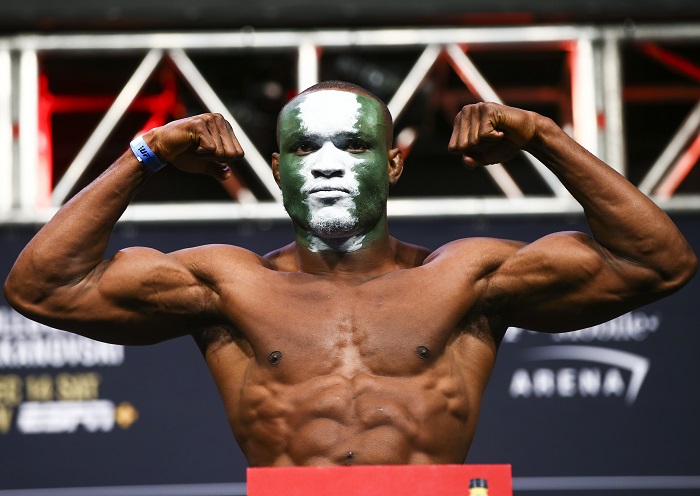 Kamaru Usman will never accept anything less than the best from himself, which is actually what led him to the UFC 261 main event this weekend.

After dispatching former teammate Gilbert Burns back in February, the reigning and defending UFC welterweight champion immediately called for a rematch against Jorge Masvidal, who he had just soundly defeated seven months earlier. At the time it seemed like an odd choice considering Usman had already earned a lopsided decision over Masvidal not to mention the UFC’s first and only “BMF” champion hadn’t competed since then to earn his way back to another title shot.

Eventually, Usman explained his reasons to UFC president Dana White, which included Masvidal’s complaints that he accepted their first fight on just six days’ notice and had little time to actually prepare for a title opportunity. That was enough for White to book the rematch, but now just days away from his fourth title defense, the Nigerian born champion admits there was more to the story than just having the chance to silence Masvidal once and for all.

“At the end of the day, it’s not about him. It’s about me,” Usman explained when speaking to MMA Fighting ahead of UFC 261. “I personally wasn’t satisfied with the way that I dominated him. I don’t feel like I fully broke him in the way that satisfied me. That’s why I called for it again. When I’m going through my career and I’m older and I’m sitting down and I’m like yep, broke him. Yep, broke him, too. Yep, knocked his ass out. I want to definitively sit back and say yep, I took care of that one. That was light work for me.

“That’s why I aim to do this again, I aim to improve on my performance. As you see, I’m still getting better, I’m still learning. I’m still growing as a fighter. Of course, April 24 I’ll be looking to improve on the dominant win that I’ve already gotten over him.”

On his path to becoming champion, Usman vanquished every opponent standing in his path while only losing a handful of rounds while delivering dominating performances each and every time. To become champion, Usman promised he would punish Tyron Woodley for five consecutive rounds just to prove a point and that’s exactly how the fight played out.

When it came time to face off against the always outspoken Colby Covington in his first title defense, Usman declined to use his wrestling and instead engaged in a striking battle that ended with a fifth-round TKO while dishing out a broken jaw to his very vocal opponent.

Time after time, Usman seems to know how to call his shot so what’s his prediction for the fight against Masvidal?

“I think it’s just dominance to the point where you see an opponent just kind of wilt and find a way out of the fight,” Usman said. “Just basically, ‘I can’t handle this, just find a way to take me out.’ That’s what I’m looking for each and every time and that’s what gets me my fix. That’s my thing is getting an opponent to the point where they’re just like ‘I don’t want to be here with you anymore, please take me out.’ Finding that with him, I think is going to be key.

If he’s able to hand Masvidal a second defeat, Usman will likely guarantee they won’t meet for a third time but this isn’t the only rematch that he might have to revisit while still serving as UFC champion.

Covington has already been declared as the No. 1 contender at 170 pounds despite Usman previously saying that the former interim champion needed to win at least another fight before earning a rematch against him.

While he’s never shied away from anybody the UFC has put in front of him, Usman can’t help but wonder at what point does he start seeing diminishing returns in his results if he’s just beating the same opponents over and over again?

“That’s a really, really good question because I’m asking myself that as well,” Usman said. “Being a realist and I’m honest with myself and I know that I can’t do this forever and I don’t want to do this forever. Like I said, we’re on a track right now, I’m just so far ahead of these guys that I’m coming back around and I’m lapping them now. So, talking to some of my mentors, and some of the greatest that have done this, what they’re telling me at some point it’s going to start, that waking up in the morning and going to the gym to put in a day’s work is going to start to get heavier and heavier when nothing really motivates me like that anymore.

“So this one, I’m motivated because I didn’t really feel like I got that fix. I’ve still have that fear in me. I want to go out there and get this one but after this we have to really take a hard look and see what there is out there for me. Because it’s not these guys. Whether it’s crossing over and doing something else or maybe walking away, you never know.”

The list of fighters who have walked away on top is rather short but Usman saw one of the greatest competitors of all time do that very thing just a few short months ago when Khabib Nurmagomedov called it a career just after beating Justin Gaethje and moving his record to 29-0.

Of course, Usman isn’t saying he’s retiring any time soon much less declaring that’s his intention after UFC 261 but he knows in order to define his own legacy in the sport, he needs contenders who will truly challenge him.

As it stands, Usman already holds wins over four of the top five fighters ranked in the welterweight division and he’s not sure how much he gains by beating the same people over and over again.

“Yeah, these guys have to show me something to let know, to put the fear in me that ‘oh man, I’ve got to get up, I’ve got to wake up and get up and prepare for these guys,’” Usman said. “Because right now, there’s not much that they can offer me. There’s just not much cause I’m just so far ahead of them right now that I’m lapping these guys.

“Another thing that’s frustrating is these guys aren’t not wanting to fight each other. How is the champion the most active guy in the division? That’s ridiculous to me. Covington is offered to Masvidal, he turns him down. Edwards is offered to Covington, he turns him down. [Khamzat] Chimaev is offered to [Stephen] Thompson and he turns him down. These guys don’t want to fight each other but they’re waiting for the champion to just pull their number and say ‘all right, you come make some money and you come make some money.’ That’s what I mean. These guys need to go out there and put on a performance to where I’m like ‘wow.’ That motivates me. I’ve got to fight that guy.”