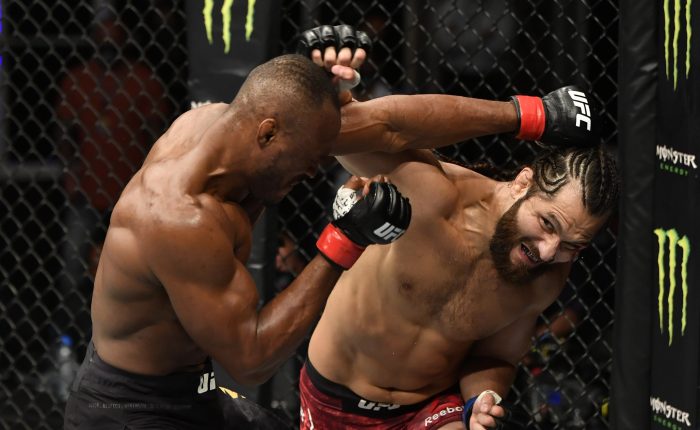 Kamaru Usman wasn’t satisfied with his previous win over Jorge Masvidal but he’s very happy with the result in their rematch in the UFC 261 main event.

The reigning and defending welterweight champion delivered a picture-perfect knockout to finish Masvidal in the second round to cap off an action packed night of fights from Jacksonville, Fla. The end came after Usman threw a rocket of a right hand that absolutely blasted Masvidal in the jaw and sent him down to the canvas in a heap.

A few more shots followed but the fight was already over as the stoppage came at just 1:02 in the second round.

“Jacksonville, Fla. Ya’ll said you wanted violence. You’re welcome,” Usman said to the raucous audience at the VyStar Arena as the UFC welcomed a sold out crowd for the first time in over a year.

Prior to the knockout, the first big shot of the fight was also landed by Usman after he connected with a hard right hand that tagged Masvidal on the jaw and the “BMF” champion smiled after eating the punch. Moments later, Usman rushed ahead with a powerful takedown that brought Masvidal crashing to the canvas.

The fight eventually got back to the feet and Usman again landed another hard right hand but this time Masvidal countered with a jumping knee strike that appeared to connect, although the champion didn’t seem to be affected.

As the second round got started, Usman was a little more wild on the feet but he was still keeping Masvidal honest with his striking as the crafty veteran kept waiting for an opening to return fire.
That time never came because Usman unleashed the right hand that put Masvidal’s head on a swivel as he fell to the ground and there was almost an audible gasp from the fans in attendance as the fight came to a dramatic end. Following the win, Usman had nothing but praise for Masvidal for bringing the absolute best out of him on Saturday night.

“Thank you to my man, Jorge. You elevated me,” Usman said. “It’s been a while since I’ve been extremely nervous for fights. He elevated me. He made me go to the workshop. I had to sharpen all my tools. I had to come out here and put on a performance like that.

“I told everybody I’m still getting better. The sky’s the limit for me as long as I’m doing this.”

Undefeated in the UFC, Usman has now dispatched yet another top ranked contender as he continues to establish himself as one of the greatest welterweights in the history of the sport, although there’s another ranking he’s seeking to attain now.

“I know with my fundamentals I am the pound-for-pound best fighter on the planet right now,” Usman shouted.

As for Masvidal, it was the second time in his career that he’s ever been finished with strikes and he paid homage to Usman for a job well done after falling short in his second attempt to become UFC champion.

“It hurts,” Masvidal said. “I’ve never been knocked out in 50 pro fights. Usman showed me something he didn’t show me the first fight. I didn’t feel his power and that’s what happens when you’re overconfident.

“All the props to him in the world. He caught me by surprise. He’s got my number. Nothing I can say, he won this fair and square. God bless him.”