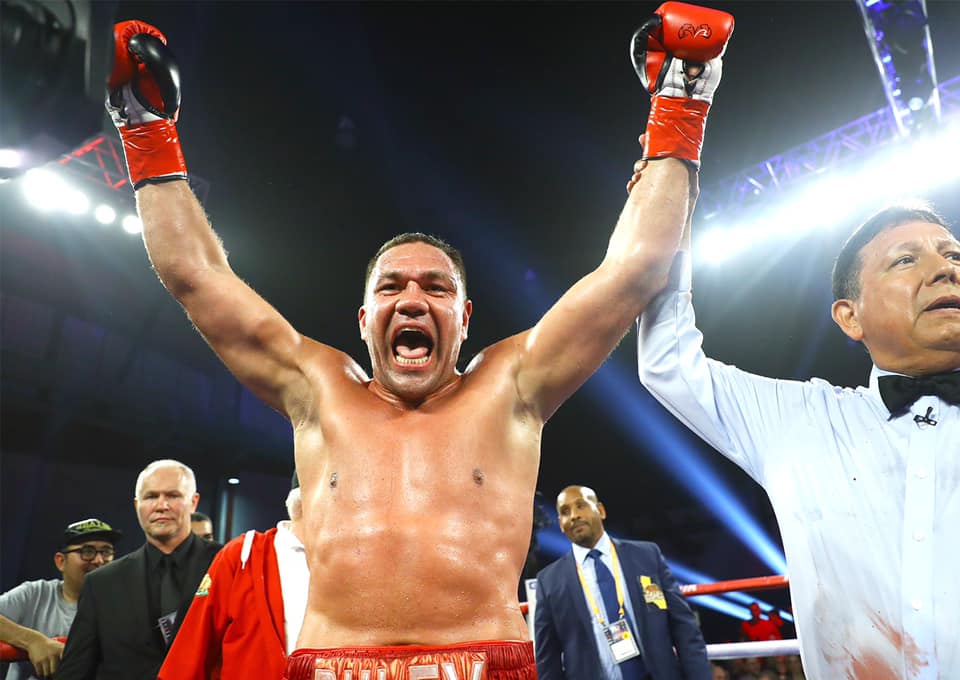 In an entertaining main event on ESPN, heavyweight contender Kubrat Pulev fought through a good amount of blood to score a stoppage win over Bogdan Dinu.

With the win, Pulev (27-1, 14 KO) remains a real player in the division. He’s currently the IBF’s mandatory challenger, meaning he’s got a shot at Anthony Joshua technically waiting for him, and he’s the biggest name under the same promotional umbrella as Tyson Fury, which is another big fight that could have been lost tonight.

Pulev, 37, was cut horribly outside his left eye in the fourth round, the result of clean punches from Dinu (18-2, 14 KO). The underdog Dinu really went for it, but veteran Pulev stayed calm, didn’t let the cut panic him, and kept the course.

In the seventh round, Pulev put Dinu down, but then landed a shot to the back of Dinu’s head when Dinu was on the canvas. The referee took a point from Pulev, but also ruled it a legal knockdown.

After being given some time to recover, Dinu got back into the fight, but was decked a second time on a right hand from Pulev. He got up just before the count of 10, but was dropped a third time, and stopped at 2:40 of the seventh round.

“I was prepared, I was fit. I was really good in this moment,” Pulev said. “I think I was very good tonight. I showed good punching and strategy. We prepared very well.”

Pulev has now won seven straight since his 2014 loss to Wladimir Klitschko, remaining a highly-regarded contender in the division.

“It was a good fight. I caught him a few times,” Dinu said. “He threw some dirty punches to the back of the head. But that’s it, this is boxing. I wanted to continue, but I was unable to continue.”

Asked to compare Pulev and Miller, Dinu said, “They’re completely different. Miller is bigger, a bigger puncher, tougher than Kubrat. With Kubrat, I was so close. I won some rounds and I threw some good punches. I’ll be better and better from fight to fight. My last two fights were against two guys from the top 10. I tried to fight with these guys because my goal is to be at the top.”