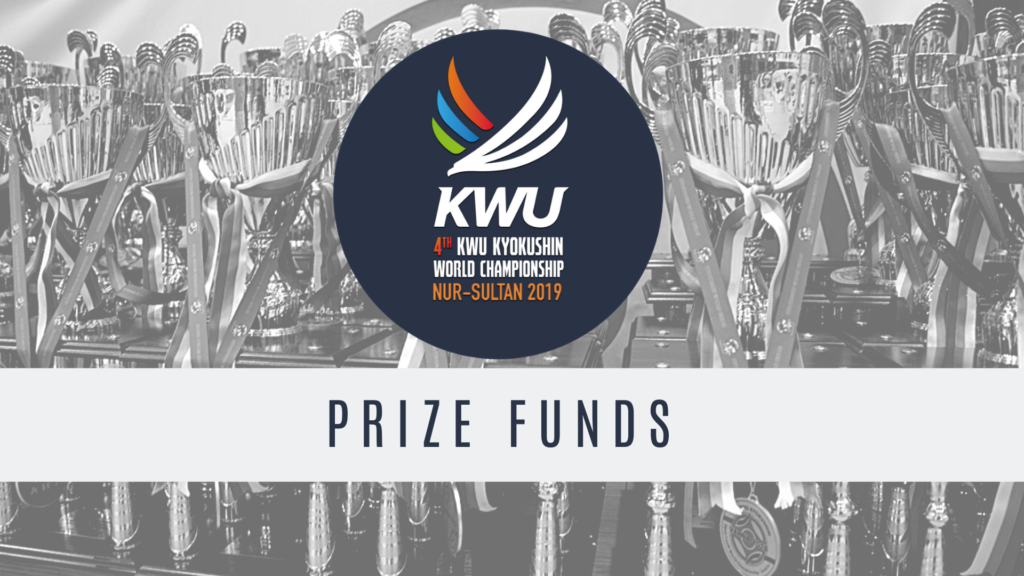 The 4th KWU Kyokushin World Championship among men and women will be held on December 7-8, 2019, Kazakhstan, Nur-Sultan.

The winners from the 1st place to the 3rd place will be awarded with the prize fund of the World Championship:

The competitor’s age is determined as at the day of going through the credentials committee, which is December 6, 2019.

Conditions of participation and number of competitors from each country

Representatives of national federations, who have passed national qualifying tournaments with calling of all interested groups of Kyokushin in a particular country at age of 18 years old and above with a style qualification not less than 4th kyu are allowed to participate in the World Championship.

Time and place of holding national qualifying tournaments are determined jointly by representatives of international organizations, listed in the “Members” section on www.kwunion.com.

Participation of competitors from WKO Shinkyokushinkai

The competitions will be held by the rules of KWU, which are published on the official website: www.kwunion.com

Conditions of summarizing of the results

The championship is a single-elimination tournament with the elimination of the losing fighter after one defeat. There will be two 3rd place winners in each weight category (no bouts for the third place).

Information for coaches, medics and supporters

The above stated categories of the World Championship’s participants pay all their expenses on their own.

The applications for hotel booking, visa support and buying of the tickets to the arena you should send to the e-mail – champ@kwu2019.com with a phrase “Team of (your country)” in the subject line, only after registration on the official website.

The World Championship’s participants of this category pay all their expenses on their own.

In order to be registered as an official a candidate should send a request to the e-mail –champ@kwu2019.com with a phrase “Officials” in the subject line and provide the following information:

Your application will be considered and after that you will receive a reply. The status of “Officials” is confirmed only after receiving confirmation from the official e-mail of the World Championship.

Attention! Registration of officials on the website is not provided. If you have registered on the website as a supporter and sent a request to the e-mail champ@kwu2019.com, but did not receive confirmation,  you will be able to attend the World Championship only as a supporter, without being provided with a badge.

The official judges are selected on the side of KWU among the KWU accredited judges. The list of the approved judges is published on the official website of the World Championship – www.kwunion.com.

Candidates for judging can take part in the judging seminar, which will be held on December 4-6, 2019 in Nur-Sultan. To do this they should send a request to the e-mail champ@kwu2019.com with a phrase “Candidates for judging”in the subject line. All financial expenses they pay on their own.

The Supreme Judge of the World Championship is Yuri Trutnev, 6th Dan, Russia.

In order to get visa support from KWU you should complete the following steps:

1) To register competitors, coaches, medics and supporters on the official website of the championship.

3) To book a Hotel for supporters, candidates for judging, officials, coaches and medics by sending a request to the official e-mail of the World Championship.

More information you can find on www.kwunion.com.