Leon Edwards to Tyron Woodley: ‘Stop being a b*tch and let’s get the fight done’ 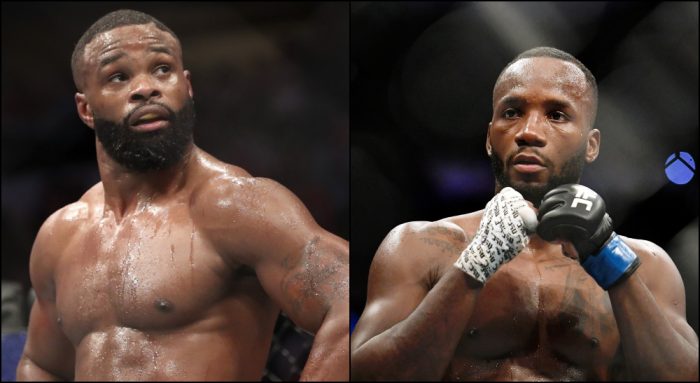 Leon Edwards knows an eight-fight win streak should have already earned him a title shot but he was happy to take the opportunity to face former welterweight champion Tyron Woodley.

Unfortunately due to the coronavirus pandemic, the matchup was cancelled along with the entire UFC Fight Night card from London that was supposed to take place on March 21.

According to Edwards, the UFC tried to scramble to get him to the United States in an effort to save the card but it was just impossible with the travel ban that was instituted on Monday.

“I went to sleep on Saturday night, woke up on Sunday around 9 a.m., got a phone call from my manager saying the event’s been cancelled and they want me to get to the states,” Edwards explained when speaking to MMA Fighting on Wednesday. “I had to get to the airport in London by 11 a.m. I was like that’s not possible to do that. From my house to the airport is like a two hour drive and to get my coaches ready and deal with their family and we didn’t know where the fight was. We didn’t know where we were flying to. It was just a crazy, crazy day.

“We didn’t know if we’d be able to get home. Not even me but my coaches. They’re older men in their 40s and they’ve got families, they’ve got kids, they’ve got businesses, they didn’t know what’s going to happen. So it was hard for me to pull them away from their families and their businesses and not knowing the plan, where they’re going, when they’re coming home to their kids, especially with a travel ban coming on Monday morning. It was impossible to get done.”

In the aftermath of Edwards being forced out of the fight, Woodley was briefly attached to a possible matchup with former interim champion Colby Covington, who offered to step up on six days’ notice with a chance to settle a longstanding grudge between the former teammates. Eventually, the UFC had to pull the plug on the entire card after the U.S. government recommended there be no gatherings of more than 10 people in any one place for at least the next 15 days.

Since then, Woodley has been vocal on social media calling for Covington as his next opponent after the fight with Edwards fell apart.

When we are back and running, it’s me and clout-chasing Covington. Don’t want to hear another name,” Woodley said on Instagram.

Needless to say, Edwards was not happy to hear Woodley’s sudden declaration that he’s only interested in Covington after they were supposed to meet this weekend.

Calling out Covington rather than the opponent he was supposed to face this Saturday is part of the reason why Edwards believes Woodley struggles to gain popularity amongst a majority of UFC fans.

“Now you can see why people don’t really like him,” Edwards claimed. “He moans a lot. He’s just a weird, weird guy. Me and him wouldn’t be friends outside of fighting. We’re two different human beings. Two different personalities. But you can tell why people don’t like him.

“He’s getting older as well. He’s 37 or 38. His leverage is disappearing. He’s coming off a bad loss. His last five fights weren’t the best. For him to try and dictate what he wants next ‘I’m only fighting Colby next,’ it doesn’t warrant the position that he’s in.”

With his current standing in the division, Edwards doesn’t feel like much else would make sense for him outside of a showdown with Woodley or one of other fighters currently ranked ahead of him in the division.

“For me, there’s no other option,” Edwards said. “I’m way overdue for a title shot let alone fighting Woodley. I’m only fighting Woodley as a favor just to get to beat a former world champion again. Add his scalp to this and get the world title.

“I truly believe I deserved a world title shot two or three fights ago. I’d fight Colby as well. Colby, [Jorge] Masvidal or Woodley or the title shot.”

Ultimately, Edwards believes the fight with Woodley is the one that needs to happen.

“Stop being a b*tch and let’s get the fight done,” Edwards said when addressing Woodley directly. “It was already booked. It got postponed because of what was happening in the world. It was out of my control, out of his control and out of the UFC’s control.

“Now let’s give the fans the fight they want to see. The fight’s been booked. Let’s get it done.”