Luke Rockhold explains how he dealt with ‘zombie’ woman attack 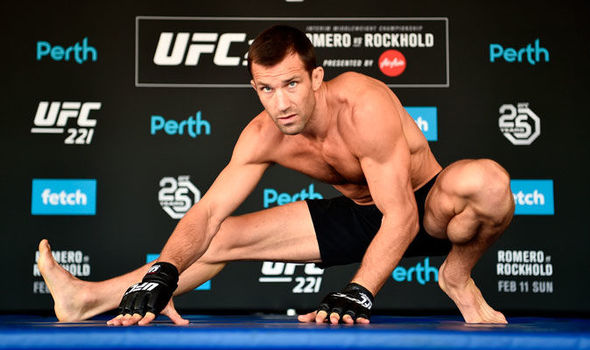 Luke Rockhold was out walking his dog and getting a workout, not expecting to have to put his martial arts training to use.

But that’s just what the former UFC middleweight champion found himself doing during a stroll down Santa Monica Boulevard when he was involved in a strange confrontation by a bus stop. Rockhold recently told Submission Radio about the encounter that involved a woman approaching him and possibly trying to infect him with COVID-19 by spitting on him.

“I don’t know what’s going on right now, it’s wild times, just going for a casual stroll with my dog,” Rockhold said (transcription via Denis Shkuratov). “I was looking for some food and I was walking around a couple of miles away from the house. I went on to Santa Monica Boulevard and, you know, I couldn’t figure out what I wanted, seeing what restaurants were open, and I walked around the corner on Santa Monica Boulevard and there’s a couple of sketchy characters.

“So, there was this guy and was kind of paying attention to this kid. I walked by him with the dog, and then I see this girl, like maybe 30-ish. She was on the bus stop bench, and she looked bad. Like, homeless, something along those lines.”

Rockhold couldn’t tell what the woman’s condition was exactly, but he speculated that she might be a drug addict and it looked like she was in rough shape. He assumed he could pass by without incident, but suddenly the woman aggressively came towards him.

“As I got closer, she popped up out of nowhere and ran at me like some zombie or something,” Rockhold said. “It was wild. It was like the last thing I expected. I was just walking and minding my own business with my dog, and this chick just runs at me within 15 feet or something. She just jumped and started to run at me like ‘arghhh’ and she started hocking a loogie like she was gonna spit on me. Like, it was like a full just like trying to scare me or infect me kind of thing. I don’t know what she was on, but it didn’t look like anything I wanted to be around. And it happened so quick, so instinctually.

“The thing just ran at me and was hocking this loogie, and I was like, ‘What the… ?’ And I didn’t know what to do. And as it got close to me I just reared up with just a vicious front kick and just launched that thing in the air, just like instinctually, and the thing just went up, landed on the ground and literally started quivering like a vampire frying in the sun or something. I was in awe of the situation. The thing was just quivering on the ground. I was like, what the hell just happened? I didn’t know. I wanted to protect myself and document it somehow and I didn’t have my phone with me. The one time I left my phone at the house to charge. It was wild. I just walked away. It was like something out of a movie. No joke. I think like… it was weird.”

Despite bundling up as much as possible to observe proper COVID-19 precautions, Rockhold joked that “trouble found me somehow.” The physical exchange is somewhat of a blur for Rockhold, though he has a fairly clear recollection of the woman running, getting ready to spit at him, and his counter kick.

In the end, Rockhold is grateful that nothing much came of it, and he considers himself lucky that nothing worse happened.

“I didn’t have time to think about it but, I watched the spit hang in the air and like pretty much fall right on top of her,” Rockhold said. “And I was like, how did I come out of this clean and not get touched? It was unbelievable. And I was just like, checked myself, nothing touched me, nothing got on me, and I was like, ‘I’m out of here.’”