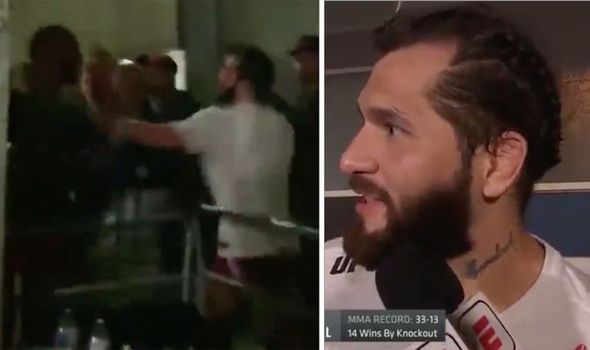 Jorge Masvidal and Leon Edwards were both big winners at UFC London on Saturday night. And then the two welterweight contenders came to blows backstage afterward.

Edwards jawed at Masvidal behind the camera while Masvidal was doing a television interview with ESPN’s Laura Sanko. Masvidal left the interview, walked over to Edwards, the two exchanged words and Masvidal landed punches on him before they could be separated. The entire incident was captured by ESPN cameras.

In an interview with ESPN before leaving the O2 Arena, Masvidal said the beef with Edwards started on social media. And the only reason why he threw punches was because Edwards raised his hands and walked toward him.

“One of these hooligans, man,” Masvidal said. “He’s like talking crap on social media. I seen him here [during fight week], doesn’t really address me as a man. I wanted to talk to him kind of and he’s just like dodging me. Whatever, we can handle it after the fight. So I’m doing this interview and this hooligan comes by saying some stuff, ‘July, get your ass kicked in July — July.’ And I go, ‘maybe.’ But whatever. Because maybe I want to kick your ass in April, maybe I don’t want to wait until July. Maybe I don’t even want to fight you in a prize ring, because you’re not worth a training camp. I’ll just fight you here. Because you’re a scrub.

“So I tell him, ‘Just say it to my face like a man.’ You’re saying it walking away. That’s not like — we’re both men, you know. And as I’m walking up to him, I’ve got my hands behind my back to signal I’m not coming here for problems. But he put his hands up like this — it’s on video — and walks towards me. Where I’m from, if you do that, you’re gonna punch me in the face and that’s not gonna happen. You’re a f*ckin’ dork, you’re jayvee, beta. You are what you are — you’re just a loser in life. You’re not gonna get a hit off me. So I gave him the three piece with the soda, then just glide out there.”

Masvidal said Edwards’ team jumped in and some members tried to “sucker punch” him. “Gamebred” said they made a big mistake, because now they “can’t even go to America anymore” and “their visa got revoked.” It was unclear what Masvidal was referring to.

Edwards’ Paradigm Sports Management team released a statement afterward that read: “Leon is fine. We will cooperate with the UFC as they investigate the matter.” Edwards will not press charges against Masvidal, Edwards’ team said.

UFC president Dana White told ESPN’s Brett Okamoto that he couldn’t “even believe that this happened.” White was not in attendance in London.

“We need to do a much better job of making sure this shit doesn’t happen at any of our events!!!!” White said, per Okamoto.

Pete Davey, a spokesperson for London’s Metropolitan Police Service, told MMA Fighting that there were no calls to the police about fighting backstage at the O2 Arena and the only thing officers did go backstage for was to “assist with helping someone to an ambulance.”

There was a disturbance at the fighter hotel, the Hilton Canary Wharf, involving crowds who attended UFC London, but it dispersed, Davey said.

“There are no reports of officers attending to speak to any UFC fighters or their managers,” Davey said.