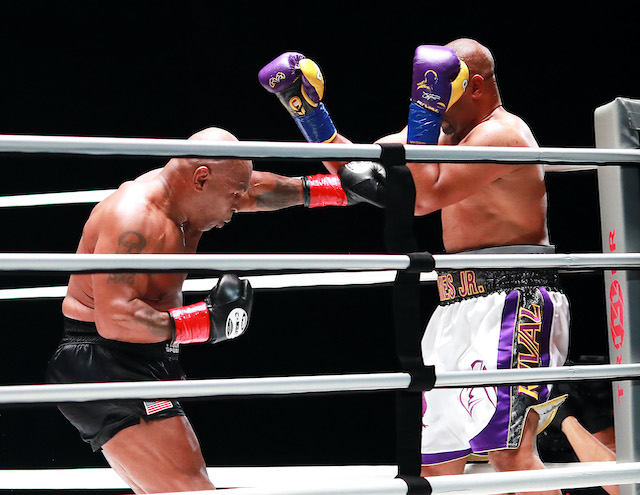 Mike Tyson’s return to the ring ultimately produced one of the biggest pay-per-view events in recent history.

That’s obviously great news for Triller, Tyson and Roy Jones Jr., who gambled on the success of an exhibition bout with the PPV selling for $49.95.

Assuming Tyson vs. Jones ultimately sells over 1.2 million PPVs, that would make the card one of the most successful events of the entire year alongside UFC 251, which took place in July and reportedly garnered just over 1.3 million buys for a card headlined by welterweight champion Kamaru Usman and Jorge Masvidal.

Those sales figures would also put Tyson vs. Jones Jr. ahead of the second-biggest boxing card of the year with Tyson Fury defeating Deontay Wilder in their rematch with that fight reportedly selling between 800,000 to 850,000 PPVs.

The card was also boosted by a boxing match featuring social media star Jake Paul, who earned a vicious second-round knockout against ex-NBA player Nate Robinson in the co-main event.

During the prime of his career, Tyson was one of boxing’s biggest draws with his fights routinely drawing more than 1 million PPV buys. His two fights against Evander Holyfield and showdown with Lennox Lewis all drew well over 1 million buys.

Tyson’s return 15 years after his final fight gained a ton of interest, especially after training videos first surfaced that showed the former heavyweight champion in incredible shape as he tore through a training session with MMA coach Rafael Cordeiro.

Still, there was no telling how many people would be interested in Tyson boxing Jones Jr. in an eight-round exhibition with no official winner. Now, the answer is clear.

Following his fight this past Saturday night, Tyson promised to return for future exhibitions including a potential rematch with Holyfield, who has also teased his return to action nine years after his last fight in 2011.