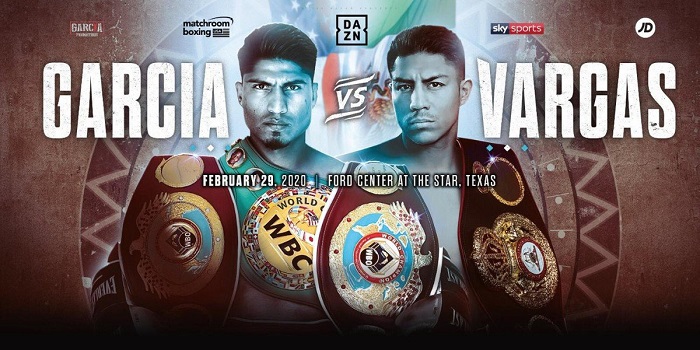 Vargas (29-3-2, 11 KO) got off to a fast start, arguably winning the first four rounds of the bout, but Garcia (40-1, 30 KO) dropped him hard in the fifth round, and took some strong momentum from there in the middle frames.

Vargas, however, did not give up on the fight, and despite the fact that his power seemed to leave him, he was able to scrap and claw in the late rounds, keeping the fight very competitive. The final four rounds of the fight were all debatable, at the very least, but the judges seemed to like the momentum Garcia started building in the fifth, and he picked up the decision.

Garcia, 32, admitted he started a bit slow, but felt his rhythm come to him in time.

“As the fight went on, I started hurting him, I started closing the gap and feeling better with the rhythm and timing, and it worked out well,” Garcia said.

He also said that he felt he was simply in better shape as a welterweight this time around. “I carried the weight a little better. I performed better and felt better. I was light on my feet when I had to be. I could feel the size difference, but my talent was able to overcome that.”

Asked if he plans to stay at 147 — which clearly he does, it’s where the biggest money fights are — Garcia confirmed that he’s not looking to move back down in weight.

“I think I have great options,” he said. “I’m ready to get back in with the best. I would love to fight against Manny Pacquiao, or a rematch with Errol Spence. I’m better now at this weight class. I want to continue to campaign at 147 and seek a title in a fifth division.”

Vargas admitted he got overconfident, and also underestimated Garcia’s power a bit.

“I got a little confident in the fourth round when I thought I hurt him, but I seemed to lighten up,” he said. “But Mikey fought a great fight. I give him credit. I think that it was a learning experience for me. It was a very close fight. I would like a rematch. I’m not arguing or disputing the decision, but I think it was close. I think I got overconfident with his power. He has good pop. I just didn’t follow the guidelines exactly. I should’ve followed instructions a little better.”

Asked if he feels Garcia can truly compete with the top names at welterweight, Vargas said, “I think he’s a good fighter. I underestimated his power. He definitely could match with some of the top welterweights. I fought my heart out. I thought it was closer than what the judges scored it, but no complaints.”