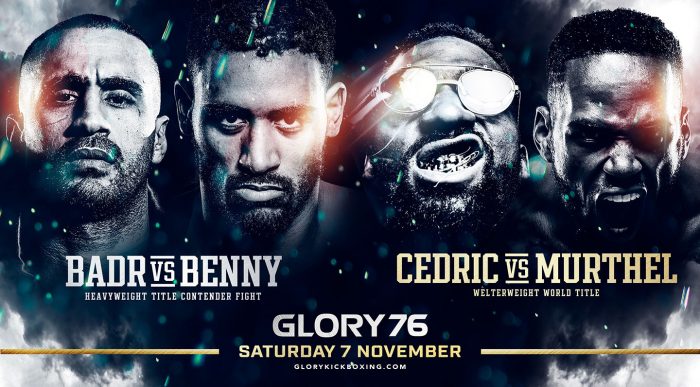 Fully recovered from his ankle ligament injury, Badr Hari (106-14, 92 KO, Morocco) is ready to return to the ring and get back on the title trail.

“Now it’s time for me to bring the heavyweight division back to the hard reality of my era…” declared Hari the day of the announcement.

In the opposite corner, Benjamin Adegbuyi (34-6, 19 KO, Romania) has been waiting for this fight for a long time. The No. 2 ranked heavyweight contender has been training with GLORY heavyweight champion Rico Verhoeven to prepare for the toughest challenge of his career.

In the co-main event, the world welterweight championship will be on the line when reigning champion Cédric Doumbé (73-6-1, 43 KO, France) and interim champion Murthel Groenhart (68-24-3, 39 KO, Netherlands) finally meet for one of the most awaited trilogy matches in combat sports.

“I think kickboxing is the most amazing sport in the world.”@badr84hari speaking FACTS! #GLORY76 pic.twitter.com/dAydMI357v

Some intense rivalries have taken place in GLORY over the years, but none quite like the rivalry between Doumbé and Groenhart. The two fighters have been going at each other online and offline for months now.

“I really don’t like him, he looks like a coward” declared Groenhart during a sit-down interview with his opponent. To which Doumbé responded: “I will knock him out and he will understand who the best is. And he will say it… if he is still alive”.

Rounding out the fight card of GLORY 76 is an exciting 4-man heavyweight tournament featuring top fighters in the division. In the first semi-final, No. 5 ranked heavyweight contender Antonio Plazibat (18-3, 11 KO, Croatia) faces No. 9 Nordine Mahieddine (25-9, 12 KO, France) who aims to secure his third consecutive GLORY win. In the other semi-final, No. 6 Arkadiusz Wrzosek (12-5, 7 KO, Poland) squares off with former Enfusion heavyweight champion newly signed to GLORY Levi Rigters (10-0, 3 KO, Netherlands).

In the preliminary event, Dutch lightweight Jos van Belzen (8-0, 3 KO, Netherlands) looks to secure his third consecutive GLORY win when he meets newly signed Damian Johansen (8-3, 4 KO, Netherlands) who has been training in the camp of former champion Remy Bonjasky.