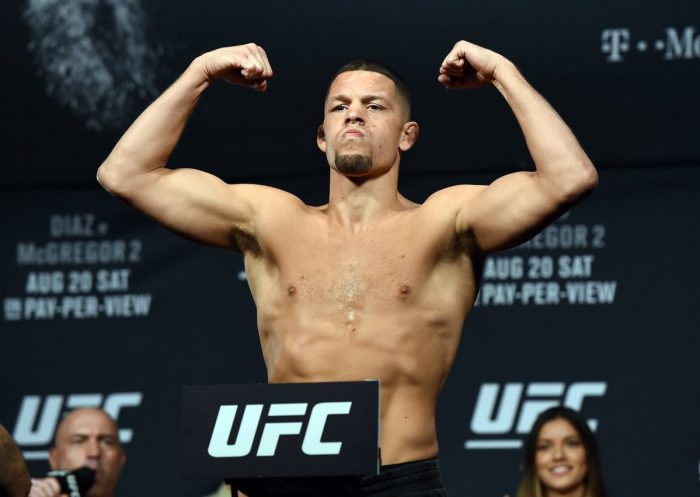 Аlmost three years to the day since Nate Diaz last competed in the octagon, the fighter gave special interview to ЕSPN. Diaz is sure – the UFC has just wanted him to disappear:

“I for sure didn’t lose that fight, but they treated it like, ‘You lost, go down the list, get out of here,’ type of thing,” Diaz said. “When he lost the first time to me, it was the biggest thing, and he needed his rematch and he’s obsessed with Nate and all this marketing on how much he needed to get this back and how great he is for actually jumping in there and doing it. I’m like, ‘Hold up, how about all the rematches I’ve ever wanted?” “That’s when I should have jumped in my contract, like, ‘Hold up, if I’m going to do this rematch, I want all my rematches that you guys never gave me.’ I should have done that, but I lost a lot of good months in my life just sweating fights that I’ve lost that I didn’t lose.”

It turned into a matter of respect for Diaz, who believes that the UFC hasn’t given him his due.

“I’m like, ‘You guys pay me way too much to be sitting here, playing a stupid (expletive) game doing what you guys want me to do, so I’m going to step it out,’” Diaz said. “Then two years flew by, and the whole time I’m sitting there like, ‘When is somebody going to step their stupid (expletive) up and start calling for a fight,’ because that’s what I did. I’m like, ‘You’re the guy getting all the love and all the (expletive) that I worked hard for, and they’re just handing it over and promoting it, and I put work in, and if you’re not sitting there thinking this guy is getting what you worked for, you’re not working hard enough.’” “I saw what was happening, and I went out there and took it,” Diaz added. “OK, this is what I’m about to do, and two years flew by, and I’m like, ‘I don’t need to be begging anyone to fight.’ I don’t need to fight. I beat the best guy at the moment. I beat the best guy, and you’re treating me like, ‘Vanish.’ Then I’m like, ‘(Expletive) me? Well then (expletive) you.’ Then after a certain while, I’m like, ‘What’s wrong with these fighters?’ I’m a bigger draw, a bigger fight than anybody in the game, and you guys are just going to sit back and not participate. Put me in the outskirts: He dropped from the rankings, he’s turning down fights.”

“You’re going to offer me prelim fighters and be like, ‘He turned this down,’ and it’s like you guys are using that against me now.”

He was scheduled to face Dustin Poirier in the co-main event of this past November’s UFC 230, but Poirier was forced out due to injury and the fight was scrapped.

“I was not waiting for him for a second,” Diaz said. “I outdone the whole game. I’m the top two fighters in whole game right now – three, Jon Jones. Three, you know what I’m saying, and that’s not fighting for three years. I don’t need to fight. I sneeze louder than everyone hears about it. But it’s like, ‘Hold up you guys want me to sit out and vanish?’ that’s what everyone wants.”

As he waited on the sidelines, three years flew by, and Diaz eventually realized he wasn’t going to win this battle by sitting out.

“I think the part of not fighting, the fight wasn’t with the fighters no more, they’re not on my level,” Diaz said. “The fight was with the whole organization, the whole thing. I’m like, I’m losing this fight if I’m just going to sit here and die off in this little town.”