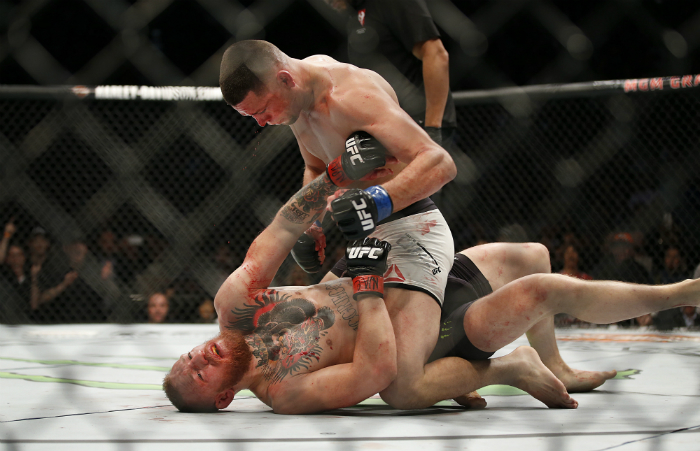 It seems Nate Diaz (20-11) is serious in his fight proposal to Jorge Masvidal. Right after his UFC 241 win over Anthony Pettis, the Stockton native called out “Gamebred” to a meeting inside the Octagon.

A lot of fans were scratching their heads though – Nate was talking about defending a title against Masvidal, but… he doesn’t have one. No worries, Nate clarified what he was talking about in his post-fight interview. Diaz said he wants to defend his “baddest motherf–ker” belt.

“You have to recognize who is the best in the game, and it’s not who they’re saying it is,” Diaz said at the post-fight press conference.

“It’s who I’m saying it is. It’s the guy who has been winning forever and are still on the top of the game.

“Pettis just knocked out Thompson, who just fought for the 170 title a bunch of times. He fights Pettis and Pettis knocks his ass out real quick.

“Who’s the real badass dude in the 170 division? They’re trying to pump up this dude (Askren), and Masvidal goes in there and knocks his ass out. And he’s been in here since I started fighting in 2004, I think. I think he had been there a little longer, and he just did that (to Askren). And I just did that (to Pettis). So, that’s the best fighter to me, the best martial artist who is still on top of the game.”

“No one’s showing any acknowledgment for being the best fighter in the world. Which I am, just like Masvidal. I’m the best martial artist. We’re not just some ‘hold on to me wrestlers,’ who will hold you and hopefully win a round, finding a loophole to winning these fights and put a belt on their waist,” Diaz said. “Now we’re fighting for the baddest motherf—ker in the game belt. And that’s mine!”

“So I’d like to defend that against Jorge Masvidal, so if he wants to be the baddest motherf—ker, that’s how we gonna do it.”

Diaz also mocked how other fighters address their post-fight interviews, as many try to be polite about who they want to fight next.

“Quit acting like this is a professional sport. ‘Whatever they want to give me?’ No, I’m going to take what’s mine,” he said. “That’s what I’m talking about, the baddest motherf—ker title. I need that belt made as soon as possible.”