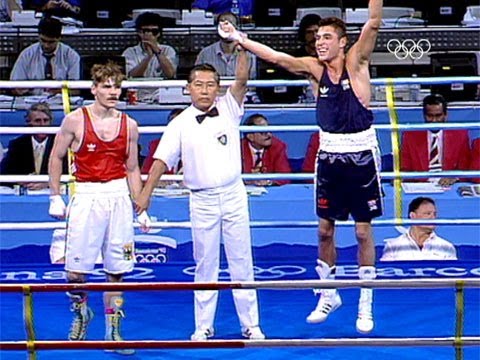 Over the last three decades, Oscar De La Hoya has been one of the most notable and powerful figures in all of boxing, from his pro career as a six-division world titleholder and one of the sport’s biggest money generators, to spending the last 18 years as a key figure for Golden Boy Promotions, an entity many thought would fizzle out when it was formed, but has endured as one of the most powerful promotional firms in the business.

But everyone starts somewhere. Oscar started, of course, before the 1992 Olympics, but as far as the wider public goes, that’s where we first met the kid who would come to be known as the “Golden Boy.”

He’d been a 119-pound Junior Olympics champion at the age of 15, and in 1989 he was a Golden Gloves champion. He went a reported 234-6 as an amateur overall. At 17 in 1990, he became U.S. National Champion at featherweight, and the accolades kept rolling in as he won gold at the Goodwill Games as the youngest American boxer in the field.

Things took a turn in his personal life, however, that same year. Oscar’s mother, Cecilia Gonzales De La Hoya, died that October from breast cancer, and the legend goes that she hoped her son would win Olympic gold.

Two years later, De La Hoya made that dream reality. He beat Brazil’s Adilson Rosa Silva in the opening round (RSC-3), Nigeria’s Moses Odion in the second round (16-4), Tontcho Tontchev of Bulgaria in the quarterfinals (16-7), and Hong Sung-sik of South Korea in the semifinals (a narrow 11-10 victory).

That led to a final round, gold medal matchup with Marco Rudolph of Germany. Rudolph and De La Hoya had similar paths to the fight, really. Like De La Hoya, he’d been a standout amateur in his home country. He was a few years older than De La Hoya, and the two had some history. At the 1991 World Amateur Championships in Sydney, Australia, Rudolph had beaten De La Hoya on points in the opening round. It was far from any guarantee that De La Hoya was going to win this fight.

You can watch the fight in full up top, so I won’t describe all of it. But De La Hoya dictates the bout, winning on a score of 7-2, largely able to shut Rudolph down and flash his superior speed and power, the latter of which you don’t always see a ton of in the amateur ranks, simply because the style — especially then — was all about scoring points, not taking risks to muscle up on a foe.

De La Hoya was the only American to win gold at those Olympics, with middleweight Chris Byrd (silver) and flyweight Tim Austin (bronze) the only other medalists from the United States.

As for Marco Rudolph, he’d stay in the amateur ranks a few more years, then turn pro in the summer of 1995. He won his first 12 bouts, then challenged old amateur rival Artur Grigorian for the WBO lightweight title in March of 1998. Grigorian stopped Rudolph in the sixth round, and he never fought again.