Peter Aerts at 50: Kickboxing has given me more than it took 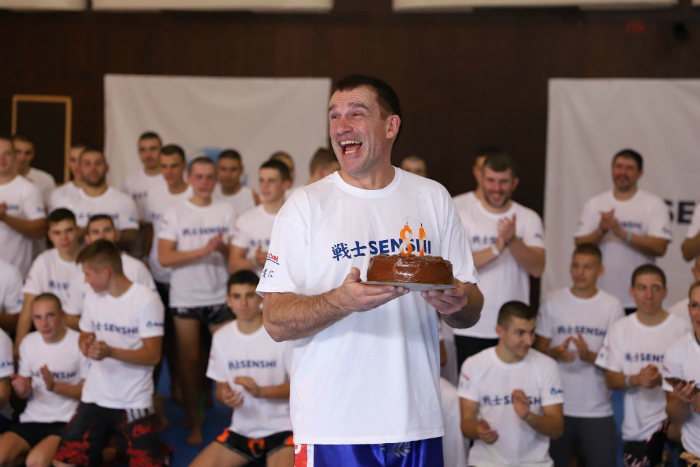 With three world titles in the K-1, conquered in the nineties of the last century, Peter Aerts is one of the most successful martial arts sportsmen that the Netherlands has produced.

Thanks to his unprecedented fighting spirit and spectacular knockouts in the ring and his jovial appearance outside, The Dutch Lumberjack became perhaps the most popular kick boxer of all time. Aerts will celebrate his fiftieth birthday on Sunday.

Our collegues from De Telegraaf talked with the legend Aerts. Peter Aerts loves dogs. After the death of his four-legged friend Pablo, he takes Cinta, a Dogo Argentino, out twice a day. Ⓒ RENÉ BOUWMAN

In his gym in Enschede, he proudly speaks about his twins Montana and Marciano (19), but also about the impact kickboxing has on his life, the recent death of his four-legged friend Pablo and the lasting appeal of the country where he is so highly regarded: Japan.

How much does age matter to you?

“It’s a cliché, but fifty is just a number. Yet it does indeed sound old. I can still remember very well that my grandfather turned fifty and now it’s my turn. But I feel more like thirty years old. That’s because I am always busy, especially with my gym (Fight Institute Peter Aerts) and I am regularly abroad with the fighters I coach or to teach kickboxing. Moreover, as a trainer I deal with younger people a lot, which also keeps you young at heart. I’m not afraid that the people who train with me will call me an old buck or something like that, because they know that I can still do quite well in the ring. So they don’t dare, haha.” What do you do to stay fit?

“I still exercise every day and am very careful about my diet. I have to do that, otherwise I will become a stiff granny in a month. And in this corona time, it is especially important to be as fit as possible. Of course my 34-year kickboxing career has left its mark, more physically than mentally. My right hand is badly damaged and I have a worn out right knee. That’s why I make sure to keep my muscles strong. I just trained with my son Marciano. It feels wonderful for us to advance together.”

Was your top sport experience too extreme in retrospect?

“Sport is great, but top sport is not healthy for anyone. I have sometimes gone on too long in a fight, when I should have stopped. But kickboxing has given me more than it took. It was a great time that I would do again in a minute. Without all that sport I would now be stretched out on the couch like an old man with a big belly.”

“Persistence is in my character. Last year I fought another match in Japan. Within ten seconds, I tore my left biceps. That hurt a lot, but in the second round my opponent was still knocked out. Luckily, I still had a right fist and my kicks are also good. I thought: this might be my very last fight, then I can’t give up. As a kickboxer you cannot just ask for a substitution like, say, a football player can.” What is that: that eternal hunger of former top fighters for the ring?

“It is the adrenaline rush that I miss the most. In the past, I would eagerly await each fight for a long time and then it was him or me. And although this will always be an itch of mine, I don’t want to fight a top match any more. Now, at the age of fifty, it can do me no good. A number of former top fighters, including Ernesto Hoost, Semmy Schilt, Remy Bonjasky and I, have been asked to fight in France at the beginning of 2021. I don’t know if it will happen, but I am willing to compete against a good B-grader there. Fortunately, I also get satisfaction from other things these days, such as my gym. But I can also enjoy a walk with my dog.”

Speaking of dogs. Last month you had to say goodbye to Pablo, one of your Dogo Argentinos.

“Yes, that was very intense. Pablo was a top dog, my great friend and ‘bodyguard’. He was almost eleven years old and had problems with his leg. We put him to sleep due to various old age complaints. That happened at our house, the whole family was there. I cried a lot, I was really devastated. But yes, death is part of life and a dog will die sooner than a human. We put his ashes in an urn. It will be given a nice place in our garden, in a kind of Balinese temple with tiny Buddha statues.” “Pablo was my loyal family friend, much more loyal than the average person. I always had to put him on a leash, because he hated everything outside of his own family. For example, a few years ago, a girl enthusiastically ran up to my daughter to greet her. Then Pablo wanted to jump her because he thought my daughter was being attacked. Luckily, I had him on a line… Now we only have Cinta, who is a few years younger than Pablo. I take her out twice a day. It is a very relaxing habit. It feels nice to spend time in nature and away from your nagging wife, haha.”

If you are standing at the corner watching a kickboxing match of one of your children, I doubt you would find it as relaxing…

“That is a completely different kind of tension than if it is you fighting. Kickboxing is a fair but tough sport. Of course, I hate it when they have to take a kick or punch, but that is part of it. The trick is to keep that to a minimum. As a coach I can play an important role in this. That’s why I always have to be super sharp during a fight, I can’t make mistakes. That creates a lot of pressure, but nevertheless, I prefer to coach my children myself. Because then I know for sure that it is all right. Kickboxing is my game, I know exactly what to do in the ring.” How far are they in their development as a martial artist?

“My daughter is a little further along than my son. That is because she has a lot more fights behind her. I’d love to launch Montana in Japan, where she’s already fought twice. Marciano is also coming along, but due to a lingering shin injury, I will only let him do boxing training for the time being. He still has plenty of time and it could soon be a big advantage if he can box well as a kickboxer. Marciano’s style is a lot like my own in the past, just like his looks. But I especially love to see that they are both passionate about it, they really love this sport. At home we can’t stop talking about it either.”

Is it true that you also get Japanese lessons at home?

“Yes, one hour a week. I do that because I will soon be starting a gym in Tokyo. And it is much easier if you can make yourself understood in Japanese and follow the conversations around you. My wife Esther and the children are also planning to take Japanese lessons sometime in the future.”

Will the Aerts family emigrate to the Far East?

“Not yet, but I intend to stay in Japan for a few months to a year. To be honest, I feel more at home there than in the Netherlands, although I also like having my family here. In Japan, where I am still a hero due to my golden years in K-1, I get things done much more easily. A simple example: a while ago when I organized a gala in Tokyo and I got the hall available for free from the municipality. In the Netherlands we can achieve much less with kickboxing, because the sport has a negative image. It makes a difference that my connections allow me to take my fighters to many places around the world. Not only in Japan, but also in countries such as Bulgaria, Romania, Germany, France and the United States.” Does the mentality of the Japanese suit you better than that of the Dutch?

“First of all, I have nothing to complain about in my dojo, but in general the people in Japan are a lot more disciplined and decent than in the Netherlands. I love that. Here things are getting bolder and more aggressive on the street. Just look at all those brutal Rolex robberies or what happened at De Pier last summer. As a result of those riots in Scheveningen, many people no longer even dare to walk there. That can’t be true!? Those perpetrators must be dealt with in a very tough manner. Give them two firm taps with a club and they will stop automatically. But no, now they can just keep going. After a day of squatting in jail they are set free again. I simply cannot wrap my mind around that.”

“And I am just as outraged about the racism debate. In my gym people come from all walks of life. Everyone is the equal to me, provided you behave. If you apply yourself, study hard and do your best, I am convinced that you can reach the top in the Netherlands. Then it doesn’t matter whether you are white, brown, green or black. But in the end it’s all about respect. Treat others as you would like to be treated yourself. I taught my children that too.”