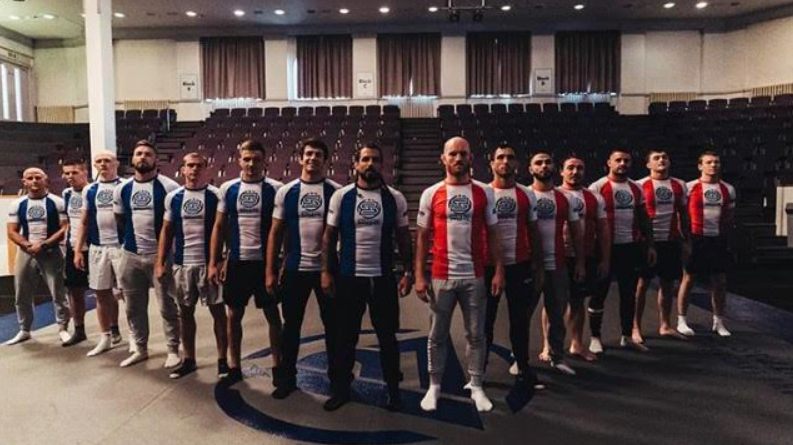 There’s 80 minutes on the clock for active grappling. The teams didn’t know who they would face and the weight categories were mixed. At half time the superfight between Ffion Davies and Magdalena Loska took place, a 66kg No Gi bout for 10 minutes.

The fights were all really interesting, due to all of the fighters having different styles and crossing over weight categories. When two high-level black belts are fighting one another, five minutes really isn’t a lot of time to find a submission. The main submissions targeted were lower body attacks such as leg locks, heel hooks and foot locks.

There were also a few nice darce attempts thrown in there from, Team Europe’s Tarik Hopstock and Team UK & Ireland’s Ash Williams. Williams also caught a couple of nice triangle attempts too, but didn’t quite manage to finish them unlike Tom Halpin – who got the only submission of the night. Unfortunately, Halpin also had to withdraw from the competition due to a foot injury, which left team UK & Ireland one man down.

Besides the fact only one submission was secured the whole night (bar Ffion) the fights were interesting to watch because the competitors were fighting opponents they’d probably never be matched with anywhere else. There were also a few close ones, where had the competitors had a few more seconds they probably would have secured the tap from the submission, such as the first fight of the night – Ash Williams Vs Eduardo Teta Rios.

Williams jumped into a heel hook right at the end, but time ran out before he could get the finish. In the second half, Williams had another good fight with another heavier competitor, but it looked as though he hyperextended his leg in the last few seconds, as Marcin Held went for a knee bar. Again, a close call – saved by the bell. You half expected Williams to withdraw from the competition after that as well, but he fought on and appeared to be uninjured. There were a lot of leg attacks attempted, but none that were successful enough to get that all important tap.

Another close bout was in the second half: UK & Ireland’s Taylor Pearman Vs Eduardo Teta Rios. Pearman went for a foot lock in the last few seconds, but failed to tap Teta Rios before the horn. The second to last fight of the night, Darragh O’Connell Vs Santeri Lilius was also a close call as Lilius went for an arm-in guillotine which looked pretty tight, but then again time caught up with them, and the round was over before he could get the tap. We also saw Norway’s Tarik Hopstock go for his classic Tarikoplatter, a move he created and named after himself.

Because Halpin secured a beautiful reverse triangle finish in the first half with 2:32 to spare, that meant time went over. Therefore there was a 9th fight that lasted 2:28 between Dominic Dillon Vs Mateusz Szezecenski, but neither managed to secure a submission in time, although it was still a real scramble.

Polaris Squads was high-impact and high -ction from start to finish. The five minute rounds left no time to stall, and fighters got straight to the grappling. Although there was only one submission of the night, it goes to show how hard these guys are to submit, and how relentless their defensive game is. One of the biggest highlights of the night has to be Ffion Davies submitting Magdelana Loska via rear naked choke with 6:40 still left to go on the clock. It would be interesting to see a female Polaris Squads competition in the future.