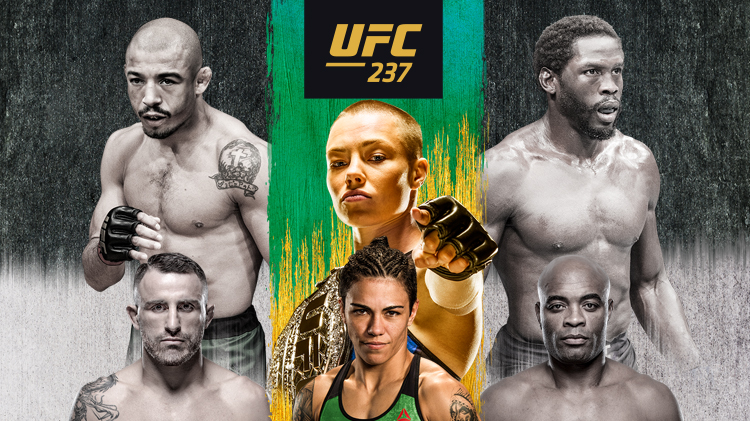 After a devastating defeat, Rose Namajunas is weighing her options.

Aiming for a second straight defense of her strawweight championship, “Thug Rose” got off to a strong start against Jessica Andrade in Saturday’s main event at UFC 237 in Rio de Janeiro, Brazil. However, any advantage she had on the scorecards was erased when Andrade countered a submission attempt with an awe-inducing slam that left Namajunas completely dazed and eventually TKO’d.

Namajunas, 26, was asked whether she felt she deserved an immediate rematch given how well she was performing up until the fateful finishing sequence, and in answering she raised an entirely different question about her fighting future.

“I’ve been hearing that [there could be a rematch],” Namajunas said at the evening’s post-fight presser. “I definitely was whooping her butt, there’s no doubt about that. I just kind of like, I don’t know, we’ll see if I’m still interested in this.

Asked for clarification on what exactly it is she’s uncertain about, Namajunas replied, “I just want to do something else with my life right now.”

Namajunas has been competing as a professional since she was 20 years old and regularly faced quality opponents in her time with Invicta FC and the UFC. Her fourth fight was against Carla Esparza in the finals of The Ultimate Fighter 20 with a strawweight championship on the line and Esparza won by third-round submission to slow Namajunas’s rise.

But Namajunas would not be denied. She won four of her next five fights to set up a title fight with undefeated champion Joanna Jedrzejczyk at UFC 217 and stunned the majority of prognosticators by finishing Jedrzejczyk with strikes inside of a round. She outpointed Jedrzejczyk in a rematch five months later and become enough of a star that Reebok signed her to her own apparel deal separate from its relationship with the UFC.

UFC 237 marked Namajunas’s first in-cage appearance in almost 400 days and she admitted that she put too many things on her own plate and that she felt pressure to return to action.

“It’s just a lot of pressure. I don’t know, I’m still processing it,” Namajunas said. “I felt the pressure to get back in there when really it was, there was just a lot of — the last fight prior to this one was just a lot of emotional baggage and stuff and juggling a bunch of different things. I’m still super happy that I came here, it was just an honor to challenge myself against Andrade. I know she’s a beast.

“Yes, being a champ, I guess, because maybe if I didn’t think that there would be an interim belt or something, then maybe I wouldn’t have gotten back in there, but honestly just the fighting itself it’s scary,” she continued. “I mean, that’s why I do this, I want to face my fears.”

Namajunas turns 27 this summer and should she decide to retire, she’d do so with an impressive list of accomplishments in just a dozen pro bouts. Along with becoming a UFC champion, Namajunas can also claim victories over names like Michelle Waterson, Tecia Torres, and Paige VanZant.

She feels she could walk away from MMA with her head held high if that’s the path she decides to take.

“I made it a point, a big motivation for me is to not waste my potential and stuff like that,” Namajunas said. “Maybe I should have said instead of ‘not waste my potential,’ like, ‘reach my potential,’ shoot for the top. Instead of a negative thing. But I know if I sit down and think about it with some time, I’ll figure out mentally where I messed up. I already kind of know some of the reasons.”

In addition to mentioning that her life outside of the cage had become cluttered, Namajunas also reflected on the mistakes she made on fight night. Namajunas described herself as being “lazy” in the second round of her fight with Andrade, which may have been the beginning of her downfall.

Just like the previous times she’s fallen though, Namajunas isn’t allowing her loss to dictate her attitude going forward, whether or not she decides to stick around in MMA.

“I wouldn’t go back and change anything,” Namajunas said of her trip to Rio. “Of course, there’s the ego side of me that’s like, that was a dumb — making dumb decisions. But look at when I lost to Carla, it changed everything. Or when I lost to Karolina, or even before that. Those wins and losses, it’s what you do after that’s important.”