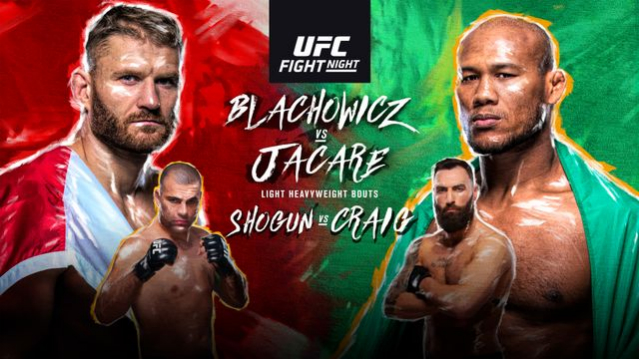 Neither Mauricio “Shogun” Rua nor Paul Craig got the result they wanted at UFC Sao Paulo after their light heavyweight co-main event ended in a split draw.

While Craig came out guns blazing as he looked to put the Brazilian legend away early, Rua powered back with a strong showing in rounds two and three while largely controlling the action on the ground. After 15 minutes in the cage together it was a razor close call, which was reflected in the judges’ scorecards.

Afterwards, Shogun felt like he deserved to get the nod after he surged ahead in a comeback during the second half of the fight following Craig’s fast start.

“I clearly knew that I lost the first round and won the second and third,” Rua said at the post-fight press conference. “My corner oriented me on the same thing and I was conscious of that. Everyone that I talked to after the fight said the same thing including people from the UFC, judges, matchmakers.

“So I really didn’t understand the criteria that the judges used to get the victory. It’s something that’s not in our control and it happens.”

As soon as the scorecards were read out loud, Craig reacted with shock because much like Shogun, he truly believed he had done enough to leave Brazil with the upset victory added to his resume.

With time to reflect on what had unfolded, Craig later admitted that he wasn’t all that upset the fight ended in a split draw, especially considering the long odds that faced him taking this matchup in Rua’s backyard on just two weeks’ notice.

“You know straight after the fight I was very disappointed but after I had time to reflect on it, and to come to Brazil, and fight a legend that is Rua in his home country and get a draw, it’s a good result for me,” Craig said. “That’s what I did on two weeks’ notice with a cut above my eye.

“We were very unfortunate when we started this camp, we literally signed the contract at the start of the week and by Friday we had a serious cut above our eye. Five stitches later, we couldn’t do any sparring, couldn’t do any wrestling. Everything we did during that fight camp was around skill-based exercises.”

The result didn’t offer any kind of true conclusion, which is why Craig and Rua are both advocating for an immediate rematch.

“The next step is there’s rumors that UFC Glasgow’s going to happen. That would be in my hometown,” Craig said while inviting Rua to face him in his native Scotland. “If I did that in a two-week fight camp, what could I do in an eight-week fight camp?

“Is there any opportunity to face Shogun Rua again? Only he’d be able to tell you that because I would take that fight in a heartbeat. Seeing how his face looked after the fight, I can’t see him accepting that fight.”

It didn’t take long for Shogun to answer that question after it was proposed to him just minutes after the first fight ended.

“He’s already been talking about a rematch. I don’t know where. I’ll accept it. I think we deserve a rematch for this fight. I don’t think this was resolved. With all due respect to him, he’s a great athlete and that’s it,” Rua said.

“I would accept it if Paul accepts it and the UFC wants it, I’d accept it. I think we deserve a rematch for this fight.”

When asked about traveling to Craig’s home country for the rematch, Shogun didn’t blink before happily accepting that challenge.

“For sure. We’ve just got to look at dates but if my team says OK, I’ll definitely go out there,” Rua said.

Heading into Saturday night, Rua had talked about the time dwindling down in his career as the 37-year-old former UFC champion started to accept that retirement was probably looming around the corner.

He had even promised his wife that he only had two fights left in his career as he prepared to face Craig in Brazil.

Considering the result was a split draw, Shogun knows he has more than enough left in his tank for the rematch and then he’ll have to work some magic to see about sticking around the fight game even longer.

“So now there’s only one [fight] to go. I’m going to have to take her to Paris to try and convince her to fight some more,” Rua said with a smile. “So really, I love what I do. I love the sport. I love to fight. I like the adrenaline and I’ve been fighting for many years since I fought two or three times in Brazil and the fourth one I’ve been fighting with the best. These challenges really motivate me.”

For his part, Craig was actually anticipating Shogun calling it a career on Saturday night if the fight didn’t go his way. Instead the split draw leaves the door open for a rematch, which Craig is more than ready to accept.

“I would love to be Shogun Rua’s last fight,” Craig explained. “I would love for Shogun Rua to take his gloves off and leave them in the center of the Octagon after I had obviously got the victory.

“I did want him to retire but I want that next fight. I want a full fight camp. Failing that I don’t get Shogun Rua, give me another Brazilian.”