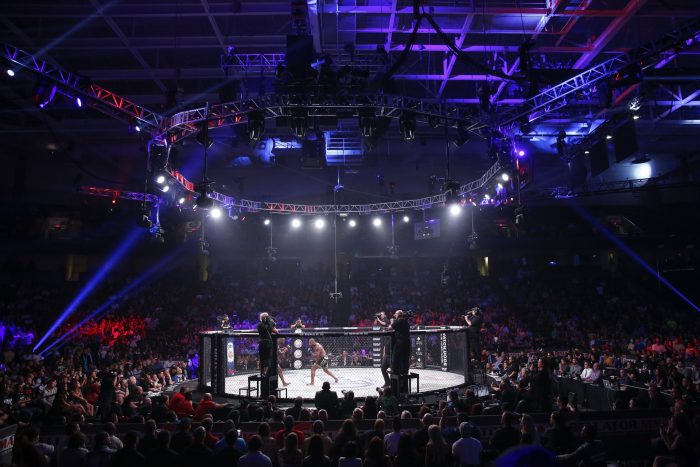 It’s not everyday a fighter pulls off a submission they’ve created, but that’s exactly what A.J. McKee managed to do in order to punch his ticket to the Bellator Featherweight Grand Prix finals.

After sitting out the majority of 2020 due to the coronavirus pandemic, McKee was anxious to return to action when he faced off with a former NCAA champion wrestler in Darrion Caldwell. McKee was also from a wrestling background, training under his father, veteran MMA fighter Antonio McKee. But he knew Caldwell would almost assuredly attempt to drag him to the mat as soon as the fight got started.

The fighters barely had the chance to throw a single punch at the start of the opening round before Caldwell swooped inside, snagged a leg and worked to bring McKee down to the ground. Once the action hit the mat, McKee immediately tried to make Caldwell pay for it as he chipped away at the former Bellator champion with elbows and punches from inside the guard while constantly scrambling to earn a better position off his back.

As Caldwell continued to maintain top control, McKee saw an opening for a submission and locked his legs around his opponent’s waist, latching into an underhook. It was the perfect set up for a move he’d actually created when he was first learning Brazilian jiu-jitsu as a wrestler.

“It’s a mix of a neck crank and a chin whip, and I used to do it a lot as a child,” McKee revealed when speaking to MMA Fighting. “I’d go from the chin whip and just keeping the underhook and once I started doing jiu-jitsu, I stopped on my back, so I’d get stuck there a lot, especially with guys that were bigger. I’d get stuck on my back with an underhook. So I just started figuring out ways to kind of manipulate the body in a way that it’s not supposed to bend.

“Even if you’re a strong person, that’s a move that you can get caught in. If you don’t know where you’re at and you get put in a bad position, I’m going to take it. It creates openings. It’s a lifelong childhood move so once I saw the opening, I trapped the body triangle on the body, I knew I had it. He couldn’t go anywhere.”

McKee seized on the opening, and once he had Caldwell trapped, there was no escape from the submission he dubbed the “McKee-o-tine.” A few seconds later, Caldwell had a telling grimace on his face, and he was forced to tap out just 71-seconds into the opening round.

Despite an undefeated record, McKee always seems to fight against the perception that he’s overrated and that he hasn’t faced strong enough opponents. Of course, 17 of them have tried and failed to prove that point, and McKee warns that the “McKee-o-tine” was just the tip of the iceberg when it comes to his bag of tricks.

“I feel like my jiu-jitsu is very underrated,” McKee said. “But hey as long as I keep making up moves finessing people into positions they don’t want to be in, I think people will continue to realize how gifted I really am.”

Considering McKee pulled off a move he created that had never been previously used in MMA, it’s impossible to deny him the honor of taking home the Submission of the Year in 2020.