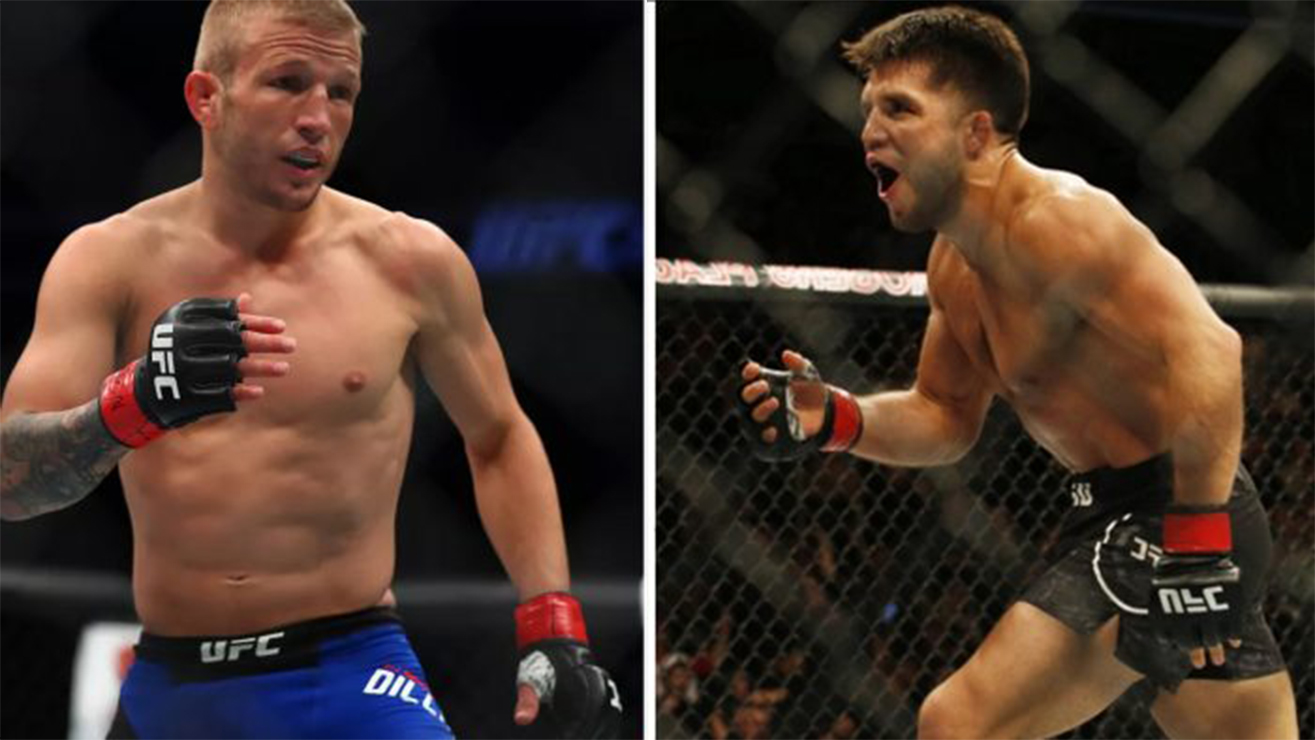 For nearly a year, T.J. Dillashaw argued for the opportunity to drop down to 125 pounds and challenge for the UFC flyweight title. When the UFC finally gave him the opportunity, he made the weight without issue but the fight proved much more difficult as Henry Cejudo stopped him in 32 seconds. Immediately after the fight, Dillashaw was livid with the outcome, calling the stoppage premature and saying the fight was “stolen” from him and a week of added reflection seems to have done little to change his mind.

Speaking yesterday with Joe Rogan on The Joe Rogan Experience MMA Show podcast, Dillashaw told Rogan he is still having a hard time accepting the loss, and puts the blame squarely on the shoulders of the “inexperienced” referee.

“It’s been rough, man,” Dillashaw said. “It’s a rough one to swallow on multiple reasons. He landed a good shot [but] everything’s being overshadowed by the shot that landed behind my ear. . . It was one of those shots that hits you on the head, right behind the ear. Not illegal, we’re on our feet, it’s completely legal but it’s one of those unfortunate situations where it just kind of takes your feet out from underneath you. You’re 100 percent there but your equilibrium is off and he jumps on me. . .

“To be honest, I didn’t know who [the referee] was. I think he’s really inexperienced. Watching him ref, he was jumping around as soon as the commotion happened, looking for a reason to stop it, almost. . . That’s the part that bugs me more. I was there, it was a shot that hit me behind the head, and then a controversial stoppage, so it’s a rough one to swallow.”

The man who stopped the fight, Kevin Macdonald, has been refereeing MMA for over 15 years and even teaches courses in both refereeing and judging. That being said, the stoppage was largely viewed as early by other MMA refereeing luminaries and Dillashaw certainly believes that to main factor in his loss. He categorically refutes the claims that cutting an additional 10 pounds of weight had any detrimental effect on his body or performance.

“I looked like a tweaker,” Dillashaw said. “If I would’ve decided to lose all the weight at the end, I wouldn’t have looked like that. But I got my body down to five or six percent body fat. When I lose anything at the end, you’re going to see it in my face. I’m one of those guys that loses and gains weight out of my face.

“I felt the best I’ve ever felt before I walked out before the fight. That’s just another reason why I’m so bitter about this thing, because I didn’t get to show the work that I put in. I didn’t get to show all the science behind Sam Calavitta and what he did with my body. I was stronger for this fight than I was my last Cody [Garbrandt] fight. I walked out two pounds heavier for this fight than I did my last Cody fight. Before I started warming up, I weighed 149 and I felt great.”

After the fight, Cejudo told Dillashaw they could do it again at bantamweight but Dillashaw felt so good that he is still holding out hope for another shot at the flyweight title.

“[My manager] has been in talks with Hunter [Campbell] and Dana [White] I hope to figure out something soon, because I’ll fight tomorrow,” Dillashaw said. “I’ll fight Henry at whatever weight he wants. Obviously I would prefer ’25 because of all the work, and I want to show I know what I’m doing, and that this was a fluke.”

Of course, despite his wishes to drop to 125, Dillashaw is the current champion of one of the most stacked divisions in the UFC and the bantamweight title will have to be defended at some point, but Dillashaw is less interested in the challenges that await him there. Unless, of course, something happens this weekend at UFC Fortaleza when Raphael Assuncao and Marlon Moraes rematch in the main event. If one of those guys makes an impression, they could be next in line for Dillashaw.

“I’d say the one that really plays a factor is Assuncao and Moraes,” Dillashaw said. “I’ve beaten Assuncao before, and Moraes is looking good too. But Assuncao’s got a big win streak, so we’ll see. It depends if I fight Cejudo at ’35 too. I don’t know what’s what.”