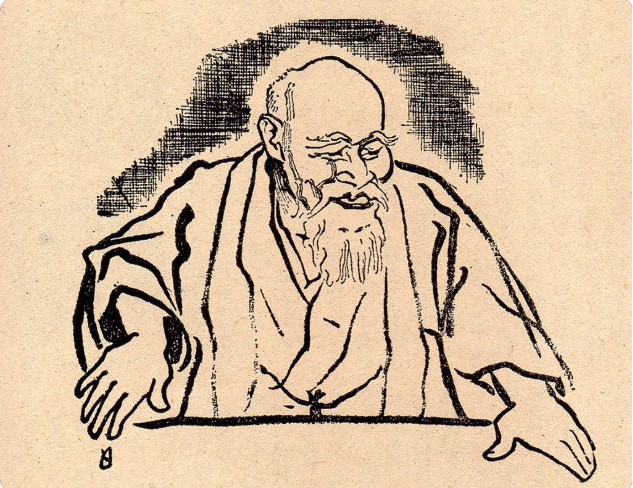 “Aikido Journal” published interview with Ueshiba Morihei – originally made on 27th of May 1956 in the weekly supplement of the Yomiuri newspaper:

Ueshiba Morihei: It’s thanks to people like you, sensei.

Yes, it’s all thanks to your support.

You aren’t good at Aikido, you’re good at making compliments! (laughs) I wonder how old you are?

You are the same age as I am then!2 (laughs) The human body is supposed to stop developing at 25 years old.

How about your skills in the arts of war4?

For the fighting arts too5, I get better with age.

Isn’t it strange that you kept growing taller until you were 50 years old?

Take it any way you wish. (laughs) If I say that too much, people will think I’m a fool.

You must be kidding! You’re a difficult one! (laughs)

Well, people like you, sensei, know well about what’s going on in the world, and so we, the people, follow you.

Incidentally, the martial arts6 are paths to harmony7. Anything which strays from the path of harmony is useless. I believe that the martial ways8 of our nation will only last in the presence of harmony.

“The beautiful form of heaven and earth is a manifestation of a single family created by the gods.9” We should become a single family spiritually and make an effort to improve the nation of Japan. We have to try to achieve harmony at least here in Japan. We should become good friends with one another, all taking care of each other. The foundations of this harmony is Aikido. It is this Aikido, which is the true budo. I want to get away from that hostile world where feudal lords from the past used martial arts as tools for military rule[hado (覇道), lit. a way of supremacy.].

You’re suddenly losing me with your Aikido philosophy!

But without resistance, it isn’t budo. That is why I don’t like it.10

You’re talking about budo used for military rule. Kendo and Judo are said to be Japanese budo, but they are concerned with winning, aren’t they? Since Aikido pursues harmony, it is completely different from those arts.

Sensei, this is a little beneath you!

Please forgive me if I was rude. I’m leaning towards the way of military rule. (laughs)

When an opponent comes to attack me, I just move my body slightly to avoid his attack, and let him go wherever he wants. This is Aiki. In other words, I give that person freedom.

I see. There are many ways of expressing this idea, aren’t there?

It’s not a way of expressing it. It’s really like that.