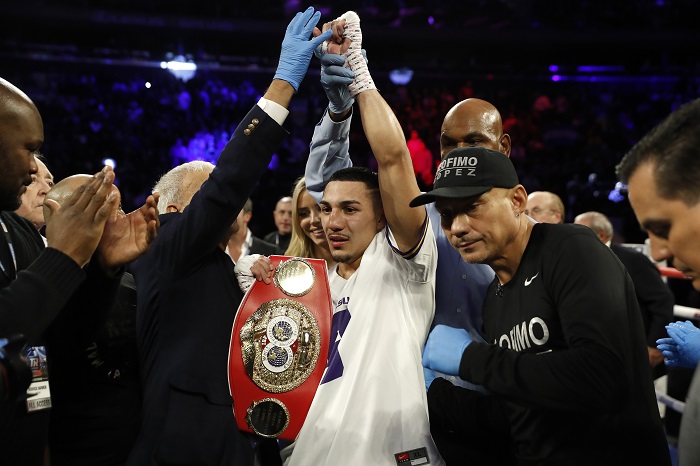 Teofimo Lopez spoke with Ak & Barak about his upcoming fight with George Kambosos Jr — which he says is happening on May 29, likely in Miami — as well as possible future fights with Gervonta “Tank” Davis and Devin Haney.

For the Triller PPV event in May, Lopez said he has two slots for his TakeOver Promotions company to fill with fighters for the undercard, and mentioned that he’s heard some talk about a Logan Paul vs 50 Cent fight, but that was said briefly in passing.

What might interest actual boxing fans most is Lopez’s claim that a Hall of Famer was originally meant to be in the co-feature.

“I was gonna be the main event, which I still am, and the co-main event was gonna be Oscar De La Hoya. But he said he hasn’t been training or whatever,” Lopez said. “But I was hype, man, I was hype, y’all wasn’t ready for that one.”

This seems possible but certainly questionable. The 48-year-old De La Hoya, who last fought in 2008, has talked a lot about fighting again, but you’d really figure he’d want to make that a Golden Boy Promotions event — you know, for the company he owns — and not a co-feature on a Triller card. It would be a major event for Golden Boy’s deal with DAZN, or to do on pay-per-view, as De La Hoya is one of the biggest pay-per-view stars ever and we’ve seen clear evidence that there is a hunger for nostalgia in the fan base.

That said, if Triller were opening up a major league bag for it, you never really know. We should learn not to doubt Triller for the moment.

Kambosos (19-0, 10 KO), of course, is Lopez’s IBF mandatory challenger, and Teofimo sort of slipped the question of whether or not he approached the IBF for an exception, to get the chance to fight a bigger name in the division, such as the aforementioned Davis or Haney or Ryan Garcia.

“I didn’t speak with them, my manager did. Not me,” Lopez said. “I’m not gonna go over there and do my manager’s job, that’s for him to do. I’m just telling him what to tell them to do.”

“You think in reality, though, we didn’t know this was gonna come about, but look at this: because Kambosos said no on the side or whatever it is, he’s making the biggest payday of his career. He stood for his own. He said, ‘I earned the right to fight Teofimo,’ and that’s it. He didn’t want to back down on it.”

Lopez (16-0, 12 KO) also has some fairly astronomical hopes for the buy rate on this show.

There’s also the lingering situation with Top Rank, who will not be promoting the Lopez-Kambosos fight, and in fact came in a pretty distant third in the purse bid, losing to the winners at Triller and also well behind Matchroom Boxing.

Lopez didn’t dig in too deep on it, but he’s been pretty clear that he wants out of his Top Rank deal. He said that Top Rank still have rights to him at the moment, and that if they want to work with other promoters, he’s willing to fight with any of the other names. He doesn’t seem confident that will happen, but plans to make it happen on his own if nothing else.

“When I’m released, that’s when I’m gonna go up to any of the networks and be, like, ‘I want your fighter, I would like to fight this fighter,’ and we can make that happen,” he said.

Given that he’s frankly expected to romp past Kambosos, Lopez admitted he does have a favored opponent out of Davis, Haney, and Garcia.