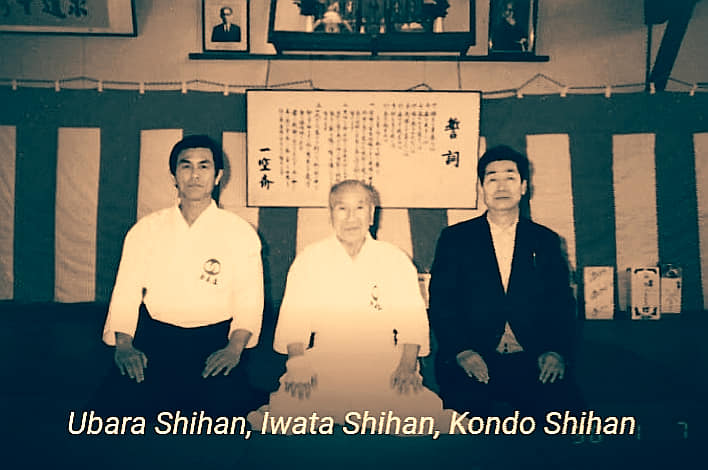 Occupying the function of President and Shihan of Ichinomiya Aikikai, Hajime Iwata supervised during the sixties, the creation of several sections of Aikido in the universities of Chūbu, Meijo, Chukyo as well as at the University of women of Nagoya and in Otani Secondary School in Nagoya.
Iwata Sensei also teaches once a month at the Aikikai dojo in the city of Yokkaichi, where he takes over from Hirokazu Kobayashi and his advanced disciples.

Shihan promoted to ninth dan in the early seventies, Iwata sensei held important positions as the President of the Japanese Aikido Federation for several years.

He is part of the Japanese delegation at the third world congress of the International Aikido Federation (FIA) which takes place in Paris from September 30 to October 4, 1980. Unfortunately a health problem prevents him from performing a demonstration at this opportunity.

Master Iwata succeeds Rinjiro Shirata as President of the FIA ​​Board of Governors at the Fourth World Congress which takes place in Tokyo in August 1984.

In June 1985, Iwata sensei was approached by Stanley Pranin , editor-in-chief of Aiki News magazine , for an interview. Their interview will also be published, in 1993, in the collection of interviews conducted by the American historian entitled ” the masters of Aikido, pre-war period” .

Iwata sensei is for many years the oldest Aikikai instructor . In November 1991, alongside Doshu Kisshomaru Ueshiba and Rinjiro Shirata, he participated in the celebrations of the sixtieth anniversary of the Kobukan Dojo.

His contribution to the development of martial arts is recognized by the presentation of the Nihon Budo Kyogikai medal.